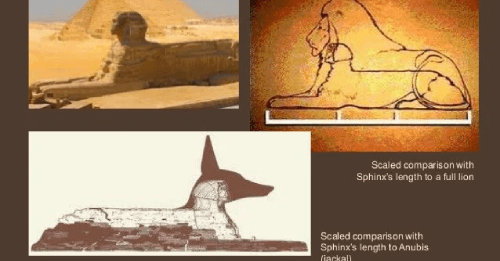 How Old Is The Sphinx? Geology Shatters Egyptologists Mainstream Theory

How Old Is The Sphinx?

Was the sphinx older than originally thought by mainstream Egyptologists? 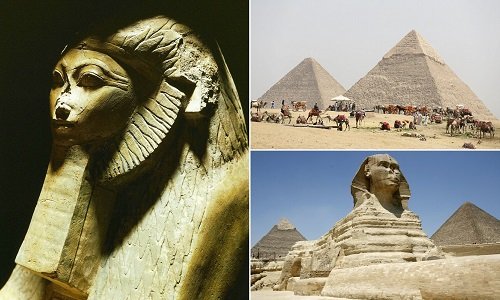 Mainstream Egyptologist date the sphinx around the same time the Egyptians were building the great pyramids of Giza 2,500 years ago.

Recent evidence shows that Egyptologists had it wrong.

How Old Is The Sphinx? How The Party Started

An alternative Egyptologist named Schwaller de Lubicz and a French mystic speculated the sphinx was much older than the pyramids, which fought toe to toe against water erosion. 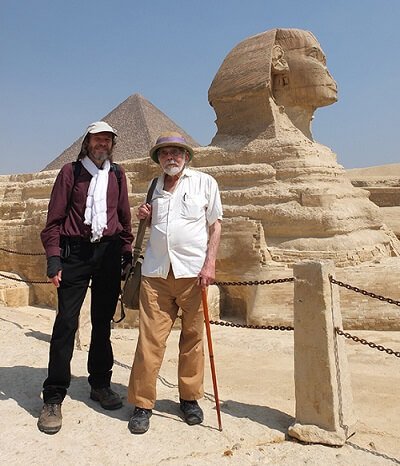 They believed all the knowledge and wisdom from the Atlantean refugees started a new era in the Egyptian culture.

John Anthony West contacted geologist Robert Schoch and they traveled to Egypt to investigate the sphinx.

I assumed that the Egyptologists were correct in their dating, but soon I discovered that the geological evidence was not compatible with what the Egyptologists were saying. On the body of the Sphinx, and on the walls of the Sphinx Enclosure (the pit or hollow remaining after the Sphinx’s body was carved from the bedrock), I found heavy erosional features that I concluded could only have been caused by rainfall and water runoff.

In 1990, these 2 daredevils Robert and John headed to Egypt to investigate the Sphinx.

He originally dated the sphinx back to 5,000 B.C. but he now he estimates it at 9700 B.C. matching up with Plato’s tales of Atlantis.

To make a long story short, I came to the conclusion that the oldest portions of the Great Sphinx, what I refer to as the core-body, must date back to an earlier period (at least 5000 BCE, and my latest research now points to the end of the last ice age, circa 10,000 BCE), a time when the climate was very different and included more rain.

How Old Is The Sphinx? The Water Erosion Theory

John Anthony West popularized the water erosion theory, which caused other researchers and geologist to investigate the theory further. 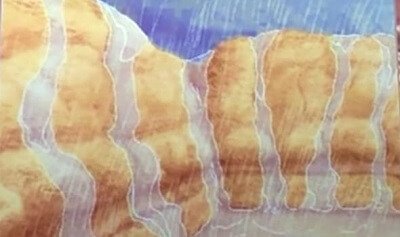 The water erosion theory started to trend, which started a movement that would assassinate the mainstream narrative.

He noticed the erosion rain patterns on the sphinx, which is strange because there’s obviously no rainfall in the Sahara currently.

The theory also presents a time when there was a lot of green vegetation in ancient Sahara.

Over the years, we’ve uncovered more information about sweet Sahara’s ancient chaotic crazy past and her naughty side.

There’s an increasing number of evidence which supports that the Sahara use to be a rainforest.

As little as 6,000 years ago, the vast Sahara Desert was covered in grassland that received plenty of rainfall, but shifts in the world’s weather patterns abruptly transformed the vegetated region into some of the driest land on Earth. A Texas A&M university researcher is trying to uncover the clues responsible for this enormous climate transformation — and the findings could lead to better rainfall predictions worldwide.

RELATED: 10 Evidences That Support That The Ancient Sahara Was The Center Of Atlantis

Geologists have studied, researched and understand the underlying process of erosion for a cozy length of time now. 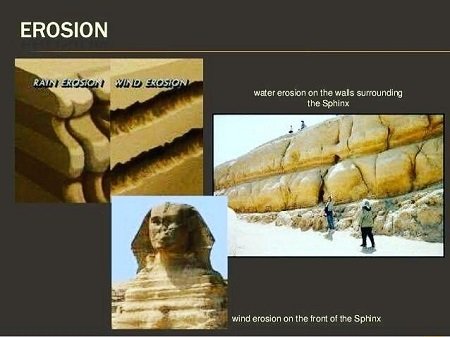 There are many examples of different type erosions and some have a mix of both of water + wind erosion, and weathering.

In this image, you can see where the constant flow of water created these vertical depressions all over the sphinx.

Wind erosion removes dust particles which leave remnants of sedimentary striations, but doesn’t form any hollowed out depressions like how water erosion does.

Erosion is a well defined and documented process for geologists. It’s something so well known that not even one geologists will disagree with the basic observations of erosion from any other – sane – geologist because these facts are too well known to mess up. A lot of geology is easy to explain as it’s a science and uses observation and testing of hypothesis over years.

How Old Is The Sphinx? Did The Sphinx Originally Have A Lions Head Or A Jackal?

It’s definitely no surprise that ancient monuments/ruins were completely tampered and reconstructed by new civilizations to claim it as their own.

It seems that the Sphinx’s head was originally a lions head created by an earlier civilization and then reconstructed by one of the Egyptian pharaohs, ages later.

Another thing is that the head of the sphinx is disproportioned from the rest of the Sphinx’s body.

RELATED: How Were The Great Pyramids Of Giza Built?

The original head would have become severely weathered and eroded. It was later re-carved, during dynastic times, and in the re-carving it naturally became smaller. Thus, the head of the Great Sphinx is not the original head. In fact, the Sphinx may not have originally been a sphinx at all. It is possible it was a lion – actually the latest evidence suggests it was originally a lioness.

If the ancient master builders can get the rest of the body proportioned, then the head should be easy as 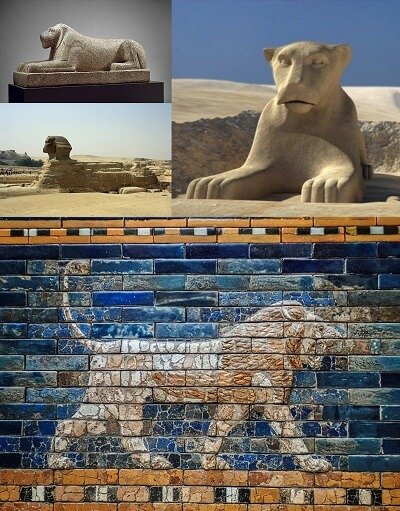 chocolate cake with a cherry on top.

Most of the lion features went through heavy weathering, which is why we’re missing a good portion of that sexy body, supposedly.

The ancients seem to have a thing for lions and was a common  symbol of worship among many civilizations, especially in ancient Sumer.

We know that the ancient Sumerians and Egyptians weren’t far from in each other in terms location and the timeline of their existence.

There’s also the fact that there are lion-headed statues in many of the ancient Egyptian temples.

The avenue of sphinx is one example of lion-headed statutes found in ancient Egypt.

as was the art of the prehistoric cultures surrounding that area and the Megaliths which seemed to have surrounded it as well. Saying the Egyptians ran out of rock is silly because they could have just made the whole structure smaller and kept it’s proportions. In summary, the geological, historical, art and megalith culture evidence all align together to support the theory that the Sphinx had originally been carved out as a large lion.

There’s also the other theory that the head wasn’t a lion but Anubis head. 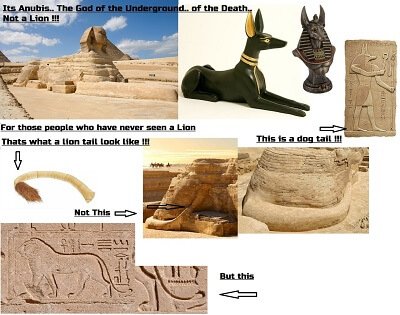 The jackal Anubis is the god of death, afterlife, underworld, idolized worshipped in ancient Egypt.

The tail of the sphinx resembles Anubis’s which supports the theory that the original sphinx’s head was a jackal.

How Old Is The Sphinx?  Possible Atlantean Origins 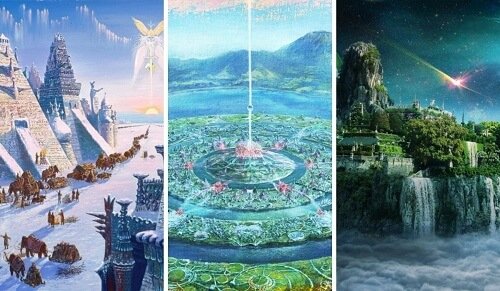 One of his greatest works was The Secret Teaching of All Ages where he discusses topics ranging from ancient alchemy, Hermeticism, Atlantis, Kabbalah, esoteric theology etc.

Wherever the Atlanteans proselyted they erected pyramids and temples patterned after the great sanctuary in the City of the Golden Gates. Such is the origin of the pyramids of Egypt, Mexico, and Central America.

The mounds in Normandy and Britain, as well as those of the American Indians, are remnants of a similar culture. In the midst of the Atlantean program of world colonization and conversion, the cataclysms which sank Atlantis began. The Initiate-Priests of the Sacred Feather who promised to come back to their missionary settlements never returned;