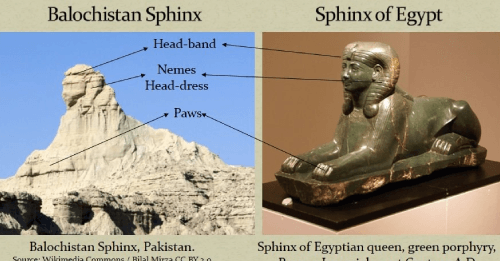 Balochistan Sphinx: An Incomplete Structure Built On A Temple

Deep in the Indus valley of Pakistan lies this great wonder that’s taken the name of the Balochistan Sphinx at Hingo national park.

It’s no secret either that the sphinx is a cross cultural symbolic motif not limited to Egypt, but shared by many ancient civilization such as Persia, Greece, Mesoamerica, China etc.

Unfortunately, there’s be no geological excavation at this site.

Some claim it’s a case of pareidolia, but there’s too many inconsistencies way too noticeable.

For one, there’re 2 (And some) other rare unique structures which are the pyramidal temple and the princess of hope. 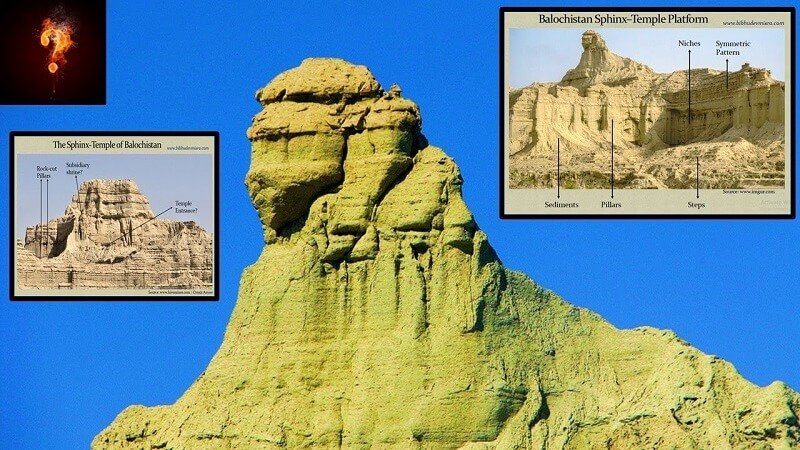 A Geological Explanation For These 3 Formations?

2 scientists from Iran and Geneva did a joint study claiming the structures naturally formed by heavy water and strong wind erosion.

The tidal waves of the sea and the strong stormy winds have scratched the Makrani coastal strip and the adjoining mountain cliffs in such a way that at first glance it looks like an archaeological complex of an ancient civilization.

That’s the best explanation we’re going to get as far as a scientific one.

So wind and water created 3 unique rock formations in the same proximity according to them?

It’s not a very compelling case considering the insane odds. 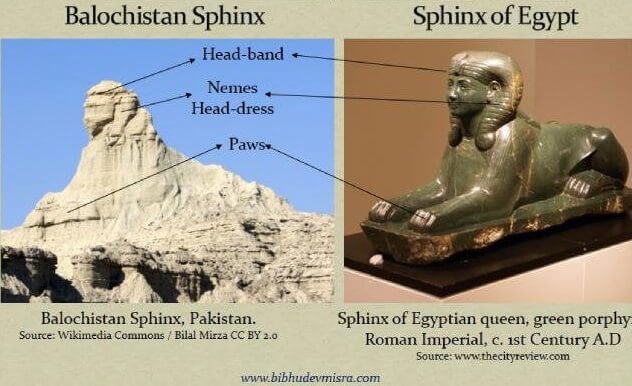 The whole head design looks proportional to the sphinx’s head in Egypt.

The paws lie in front of the body in the image as you’d expect it to be.

Just like the Sphinx at Giza, the Pakistani formation appears to include a head-dress similar to the Nemes head-dress worn by the ancient Pharaohs, with its striped markings on a cloth which covers the crown and the back of the head of its wearer.

The flaps hanging down near the ears are also clearly visible on the Balochistan Sphinx, whilst the horizontal groove resembling the pharaonic headband can be seen adorning the forehead.  Ancient-origins.net/ancient-places-asia/sphinx-balochistan 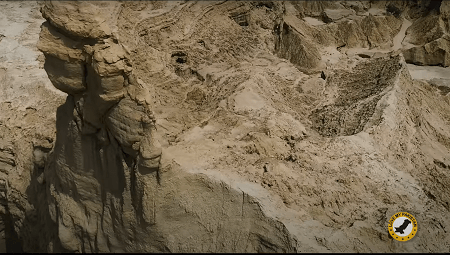 One thing to note is that this sphinx doesn’t seem to have a back side.

Something or someone caused the incompletion of this mystery.

But there are other strange inconsistencies which give us more clues.

Temple Of The Sphinx

The symmetry of the steps is noticeable as they’re evenly spaced out, running parallel to each other.

The temple steps are heavily eroded along with sedimentary dirt eroded to the floor from the pillars which bulge out from the temple wall. 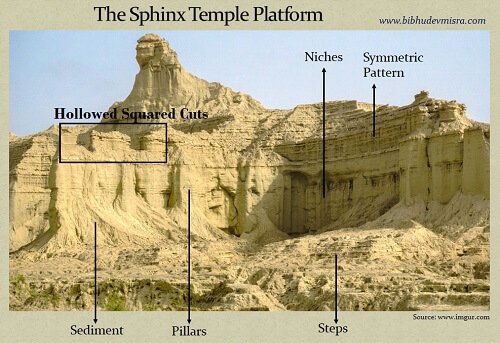 Even and symmetrical formations such as steps would suggest that the site could well prove to be much more than a passing resemblance of a temple.

‘The steps appear to be evenly spaced, and of uniform height. The entire site gives the impression of a grand, rock-cut, architectural complex, which has been eroded by the elements, and covered by layers of sediment, masking the more intricate details of the sculptures’

How come we have these hollowed out square cuts?

It completely looks like the top wall of a castle more or less.  What natural erosion process can do that?

No natural erosion process in this world can do that. 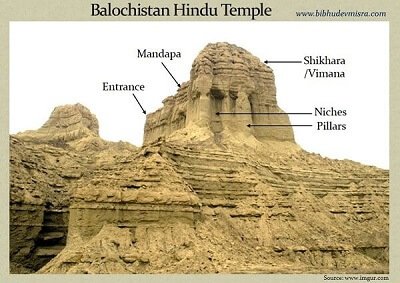 The architecture of this temple closely resembles the Hindu temples built in Pakistan.

The most notable feature are the bulging pillars and pyramidal top, with its complex design that highly resembles Hindu temple architecture.

At the bottom image there’s a strong resemblance with other architecture of ancient Hindu temples discovered in Pakistan.

The image in the left corner is another temple at the Hingo national park with a noticeable prominent pyramidal peak and a intricate design that rivals ancient Hindu architecture.

The rest of the 3 images are ancient Hindu temples in Pakistan.

If this was truly a temple, then we can easily see the resemblance of the same architecture. 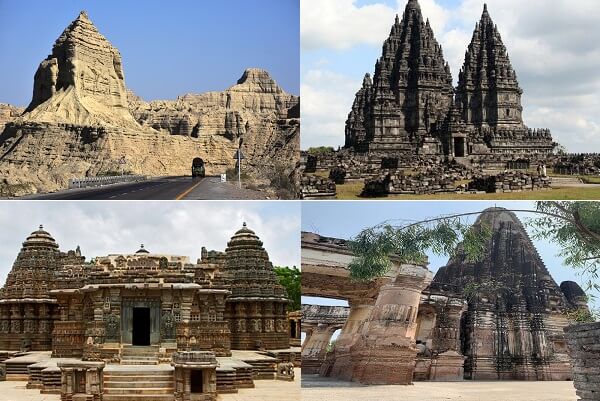 RELATED: 10 Cases Proving Eye Of Richat Was The Central Capital Of Atlantis 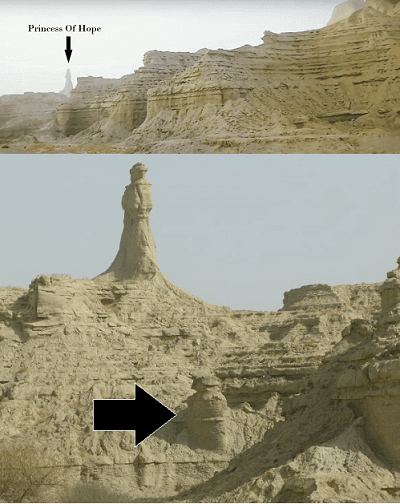 Some people don’t realize the princess of Hope is literally in the same eye view of this structure.

The wind whistled around her, teased her but she could not stop the winds as the fast blowing winds swept past her and blew dust around her. No one visited her and she felt extremely lonely.

Her only companion in he area was a huge Sphinx of Giza, Egypt like feature who shared her loneliness.

The Indus civilization has been around for ages, going back 5,000+ years, dating them back as old as the ancient Egyptians.

The Makran inhabitants (ancient Balochstian people) are the descendants of the East Africans which explain where they learned about the sphinx or the other way around. 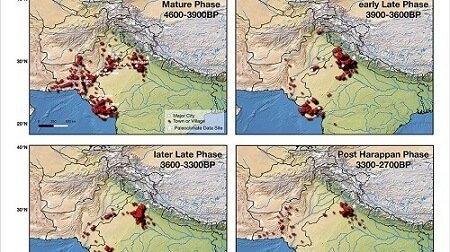 There were slave trades made from Africa to be sold to rich Muslims and Hindus of India.

Arrived in the region; believed to have been soldiers in Muhammad bin Qasim’s Arab army. They had joined Arab armies when the Arabs first conquered parts of Africa. Their population in the region greatly increased when, in the 16th century, Portuguese traders began bringing in slaves from Africa to be sold to rich Muslims and Hindus of India. So Makranis do have roots in Africa and as we know the Great Sphinx of Giza as an emblem of Egypt.

Hinglaj Mata is one of those ancient Hindu temples that’s right around the area of the Balochistan sphinx temple. 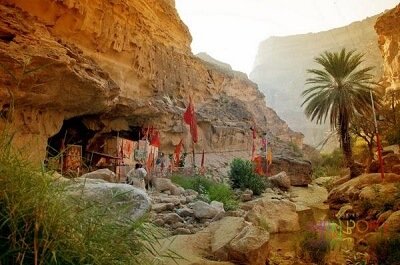 Hence, the presence of the sphinx not too far from Hinglaj Mata (Nani Mandir) surely is curious, which brings us back to Bibhu Dev Misra’s findings:

“In close proximity to the Balochistan Sphinx is another important structure. From a distance, it looks like a Hindu Temple (like those of South India), with a Mandapa (entrance hall) and a Vimana (temple spire). The top part of the Vimana appears to be missing. The Sphinx is reclining in front of the temple, acting as protector of the sacred site.”

Buddhism and Hinduism have been in Pakistan around 2,300 years under the rule of the Mauryan King Ashoka (272/268–232 BCE), leaving behind archeological footprints.

Buddhism was practiced by the majority population of Sindh up to the Umayyad conquest (712 AD). Chinese Buddhist traveler Hiuen Tsang reported many Buddhist temples in the coastal regions of Makran. The remains of Buddhist cave city called Godrani Caves can still be seen, so the Balochistan Sphinx could very well be a Buddhist structure.

Sutkagan Dor and Sokhta Koh are the 2 sites in right along the coast.

Sokhta Koh (also known as Sotka Koh; lit. “burnt hill”) is a Harappan site on the Makran coast, near the city of Pasni, in the Balochistan province of Pakistan. It was first surveyed by American archaeologist George F. Dales in 1960, while exploring estuaries along the Makran coast. The site is located about 15 miles north of Pasni.

A similar site at Sutkagen-dor (also spelt Sutkagan Dor) lies about 48 km (30 mi) inland, astride Dasht River, north of Jiwani. Their position along a coastline (that was possibly much farther inland) goes well with evidence of overseas commerce in Harappan times. Based on pottery styles, it is estimated that the settlement belongs to the Mature Harappan (Integration) Era (2600–1900 BC).

Balochistan Sphinx: Orientation of the Balochstian Sphinx Faces On A Former North Pole

Mario Buildreps work is on how ancient sites all around the world would line up on certain poles on the earth as monumental markers.

The geomagnetic north pole has changed 5 times as far as we know.

These ancient structures line up with one of temperature changes on former north poles, which exactly matches up with the past timeline of ice age cycles.

One of those structures is the Balochstian sphinx which faces toward the oldest former north pole 6 which dates back 430,000 years ago.

The Sumerian tablets talk about ancient an civilization from 430,000 years ago.

Mario believes the Balochstian sphinx is that old since the Indus valley, since it’s extremely close to Sumer. 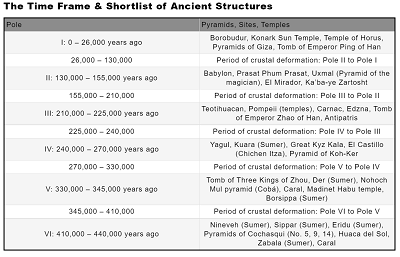 This would explain the heavy eroded erosion and pile of sediments.

That’s some intriguing evidence, but we definitely need more to make it conclusive.

But the inconsistencies are far too great to ignore and its still a mystery on why there isn’t any further archeological digs.

A Temple Behind The Sphinx

Right behind the sphinx we have these massive columnar pillars that were once part of a temple which stands completely eroded.

What’s weird is the layer of rings on the pillar capital top, yet the shaft remains smooth. 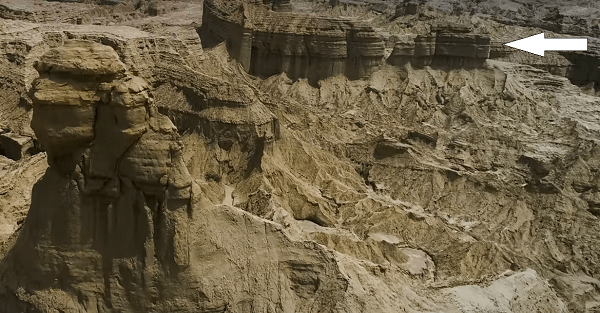 Here’s a clearly well-defined square top structure cut at a 90-degree angles, with a curvature opening.

It definitely looks like an entrance of some sort. 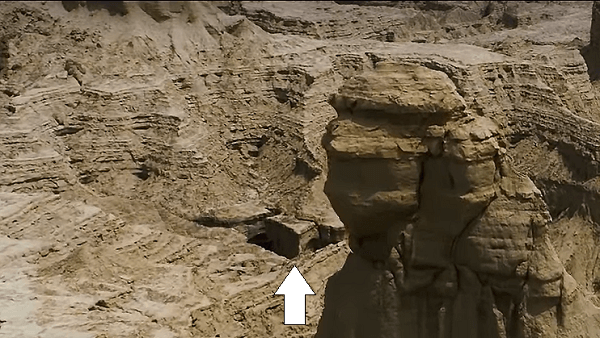 Thankfully, one youtuber took amazing video aerial shots of this wonder so you can see the live video for yourself, source: youtube.com/channel/lovemypakistan

Unfortunately he doesn’t get any closer or even take notice of it.

This massive block sits wedged in the corner.  Look at the eroded, destroyed blocks of steps as well.

There also appears to be a conjunction of pillars binding the temple wall. 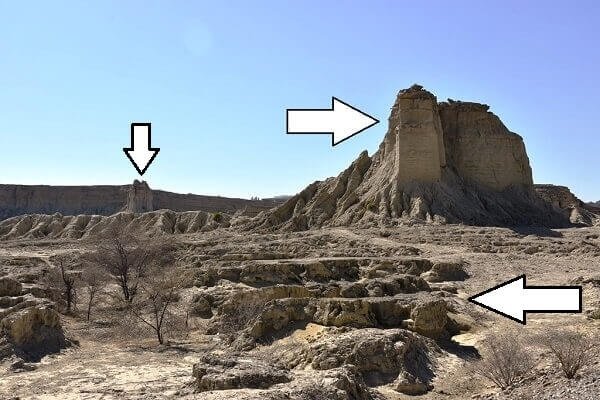 RELATED: When The Planets (Gods) Were Massive Giants In Our Ancient Skies

What’s strange is how come other ancient structures around the same area aren’t has heavily eroded?

If its that old, then we’re going to find very little to nothing here as far as archeological artifacts.

There’s heavy erosion, ancient sites get looted, and it’s highly possible this structure was destroyed in a cataclysmic flood anyways.

And they’d be washed away to the Makran coastline etc.