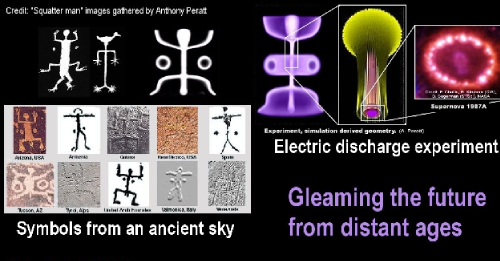 The squatter man or stick-figure man is an ancient symbolic motif found in almost every civilization and which contains many variations of a distorted human form.

The squatter man  started as early as the Paleolithic era as we see carved images into rocks found in caves all around the Western and Eastern world. stern world.

We’re talking about a motif that was drawn  cave dwelling of prehistoric times to advanced civilizations like the ancient Babylonians, Sumerians, Egyptians and Romans.

The Squatting Man or stickman figure is a prevalent symbol which is found in every culture and is often confused with a distorted version of the human form. The Squatter Man image is an archetype that has been carved into rocks or petroglyphs by prehistoric man which has been recorded by almost all nations and civilisation on the continents in ancient times.

RELATED: Undeniable Proof The Face Of Mars Was Created By Intelligent Design

What is it about this motif that people were consistently drawing it all over the world?

And we find this in different cultures, which are packed with different belief systems practices throughout the ages.

And we find myths that seem to have similar recycled stories told repeatedly with their own variations.

It reminds me of phone tag throughout the ages because the story eventually changes as more people tag along the assembly line of calls.

Or a film reboot, where for a while different variation the story line exists, until you get one with a completely different story line. 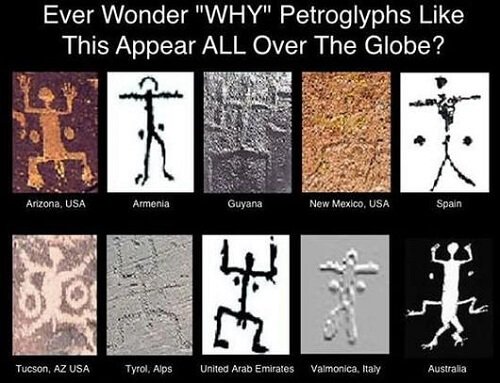 One theory states that this was a type of weird alien type of being that everyone witnessed throughout the world once the continents were connected all together in Pangea 335 million years ago.

But for such a motif to have a mass effect 335 million years and to continue to carry on throughout civilizations during the drifting of the continents isn’t highly plausible at all.

And a lot of these glyphs from the rock art painting and petroglyphs aren’t even that 335 million years old and drawn when continents already broken apart.

Another theory states that the high priests or tribal leader dreamt these being and persuaded the public that this was their god/gods and carried throughout the world slowly but surely.

The stories made the people bite into the belief system, which then carries on over generations to come and the cycle of stories continues to spin.

RELATED: Did The Planets Appear As Big As The Sun In Earth’s Ancient Skies?

It was believed that the ancients painted colour rock art and started painting strange white shapes and figures where everyone started painting the same images at the same time. Many are speculating that these races were either in contact with one another or they were all inspired by the same event which could be the most likely way of having seen it, if the event was in the sky.

The Saturn myth is the only plausible theory I can see remotely deciphering the squatter man myth. 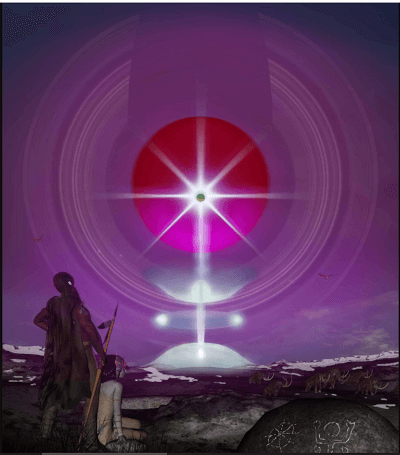 The Saturn myth basically states that ancient civilizations were living in a time where the planets such as Saturn, Venus, Mars (Ande other planets) were as big the moon and thought as the original Sun Gods before being replaced by our current sun.

Before the work of Peratt, many of the petroglyphs appeared to be little more than “stick figures” with preposterous attributes, all easily dismissed as random “hallucination” or “doodling.” Peratt’s work assures us that the basic forms have a direct explanation in plasma science.

There is also a provable connection to the evolution of mythical archetypes. Archaic rock art depictions came first, but were followed by an outpouring of conceptual elaborations, as ancient artists gave imaginative expression to the celestial forms and events that inspired the myth-making epoch.

Saturn, Venus and Mars were in alignment for long periods of time before our Sun took complete control over our current skies.

When these planets were in close range, they would create a plasma discharge effect, which would give of a massive aurora effect like the northern lights.

The sun’s solar flares clash with Earth’s electromagnetic field, creating these stunning colorful auroric configurations, which we anthropomorphize through our myths.

It would have featured exactly those abstract figures and stick men and strange animal-like shapes that appear only in rock art and in high-energy plasma discharges. He contends that the ancient artists were witnesses to this “enhanced aurora” and that they recorded what they saw on the most durable “recording device” available—rock surfaces.

From the difference in scale between a laboratory spark and an auroral discharge, Peratt estimates that the ancient displays would have lasted “for at least a few centuries if not millennia.” Radiocarbon dating of material overlying some buried petroglyphs provides a time for the occurrence of the displays at 4 000 to 12 000 years ago.

One of the most symbolic variations of the squatter man is the Hour Glass Or The Holy Grail. 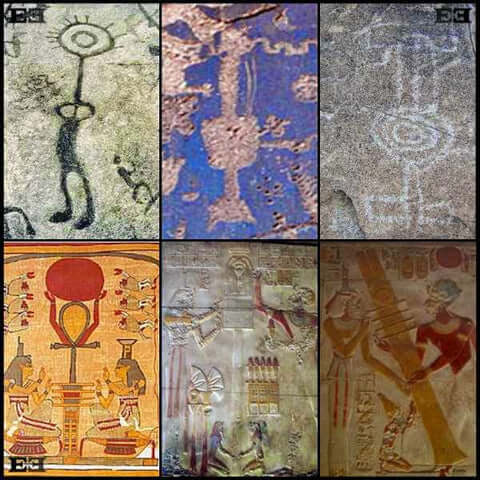 Another motif is the Pillar man, which is another motif recognized around the world in different cultures which directly relates to mars who upholds the “heavens” in which case is Saturn with the goddess Venus in between the 2 in alignment.

The pillar mans exists in Egyptian legends as Shu or Atlas, who held the celestial heavens (Zodiac) above his shoulders.

One of those to perceive the Greek sacred mountain as the copy of the cosmic mount was Warren, who concluded: “Olympus was simply the Atlantean pillar [the “pillar of heaven”] pictured as a lofty mountain, and supporting the sky at its northern Pole. In fact, many writers now affirm that the Olympus of Greek mythology was simply the north polar ‘World- mountain’ of the Asiatic nations .”

Squatter Man: Any Evidence Of Planets Lingering Close To Earth Once Upon A Time?

The Nice 2 Model is of the most notable science based theories to support the reign of planets over Earth’s skies long ago.

One other thing about the Saturn myth is the amount of Martian rock we have on Earth as it is. Yes, we have lots of ancient Martian Rock from our neighboring friendly little fiery Mars.

This just points to more indicating evidence (maybe non conclusive) of a celestial alignment between the planets, witnessed by early civilizations world wide.

The Nice 2 model resembles the original Nice model in that a late instability of the outer Solar System results in gravitational encounters between planets, the disruption of an outer planetesimal disk, and the migrations of the outer planets to new orbits.

However, the Nice 2 model differs in its initial conditions and in the mechanism for triggering the late instability. These changes reflect the analysis of the orbital evolution of the outer Solar System during the gas disk phase and the inclusion of gravitational interactions between planetesimals in the outer disk into the model.

Most solar systems, as far as we know, follow a stable order, but there are anomalies which don’t follow a very peaceful order of things. 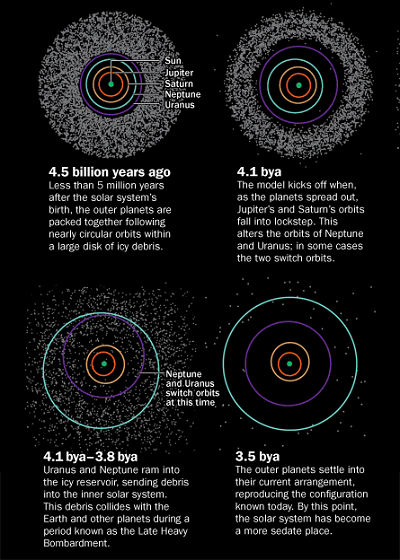 In rare cases, there are solar systems which have a more chaotic origin in which a lot of the early violent story which we hear as allegories about Gods battling, brimstones and destruction on Earth, flood myths, etc.

Another piece of evidence is the testimonials of the planets we hear about from Pliny the Elder, who was a roman author and Naval/Army commander under emperor Vespasian in early Roman civilization.

Pliny gives testimonial of which he researched, which means even older accounts about the atmosphere of planets such as Jupiter and Saturn.

This is an impossibility, with no use of advanced technological device such as the telescope 2,000 to 10,000 years ago which there was no invention of any type we know of.

Jupiter is one example along with Saturn, which he attributes lighting to from, which he himself has heard stories, from even a much older time!

Why Lightnings are attributed to Jupiter. Most men are ignorant of that Secret which, by great Study of the Heavens, Men of deep Learning have found out: namely, that it is the Fires of the three uppermost Planets, which, falling to the Earth, carry the Name of Lightnings;

but those especially which are seated in the midst, because participating in the excessive Cold and Moisture from the upper Circle, and the immoderate Heat from the lower, by this Means he dischargeth the Superfluity: and hereupon it is commonly said, that Jupiter darteth Lightnings.

Maybe there was a lost advanced technology lost that studied the stars in the earliest civilizations, which were wiped out with almost little to 0 traces of evidence.

But I’m going with the simplest explanation here and calling it a world-wide cataclysmic event which ancient civilizations didn’t know the proper language or knowledge to explain what was really going and so forth, giving rise to the myths we hear today.

Remember, only a few knew how to read and write and it was usually the kings, emperors, high priests, but not the public.

The public would bite on any information that the top officials would tell them and the brainwashed masses would follow the stories to the brim.

But by implication, he expresses his disbelief of what was so generally credited; for the ascribing to the natural effect of Jupiter as a planet, what was believed by the priests and the state to be a voluntary action of Jupiter, the supreme deity, can be regarded as little better than a subterfuge. For a natural explanation of thunder and lightning, such as it is, the reader is referred to chapter xliii. of this book ; and for other curious particulars, to the chapters l.-lv. — Wern. Club.

Myths/religious stories can contain multiple symbolic meanings that took on a new meaning from the original or a combination of 2-3 myths to create a new syncretic myth.

I believe the planets themselves were inhabited by certain type of beings and Mars is one of the greatest evidence we have for off world civilizations in the ancient past.