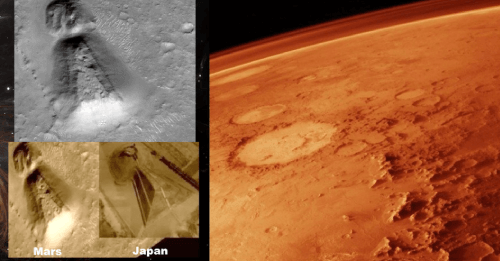 In 2011, the Mars Reconnaissance Orbiter (MRO) captured stunning imagery of this mystery.

Libya Monte’s was the region of interest that revealed a geological anomaly known as the Keyhole or an exclamation point according to some. 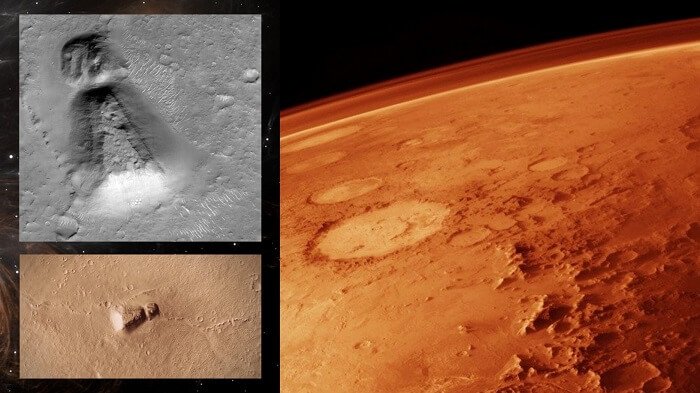 The authors confirm the keyhole structure contains an anomaly of multiple geometric consistencies, suggesting an artificial design rather than erosion.

The images reveal an anomalous structure composed of a triangular and circular component, resembling a keyhole-shape formation that exhibits a unique set of geometric measurements.

The claim of intelligent design is offered and a geologist and geoscientist examine natural mechanisms that could contribute to the formation of these combined features. A terrestrial comparison of aesthetic and iconographic motifs is investigated.

Keyhole On Mars: Geometry Of The Keyhole – The Wedge And Dome Formation

Inanimate objects have randomness and abstractness due to environmental forces.

What are the chances of natural erosion/formation give rise to such a geometrical symmetrical phenomena? 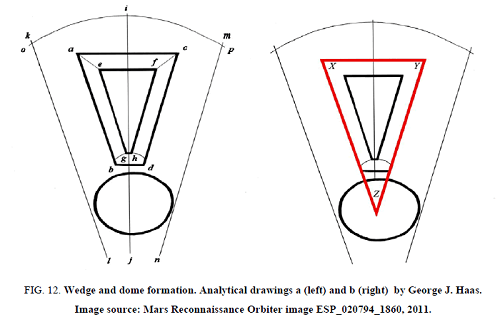 A snowballs chance in hell.

It is approximately 1109 meters wide.

The geometry of the wedge and dome formation represents two very basic geometries; the 360° circle and the 180° isosceles triangle (Figure. 12b).

The large dome-shaped formation, located directly below the wedge-shaped formation appears almost circular, while the overall shape of the wedge formation takes on the form of a trapezoid with an isosceles triangle on its uppermost surface. The angles of this triangle are x and y=75° and z=30°, adding up to 180° (Figure. 12b).

The line midline of i & j intersects the ridges top, middle, bottom layer.

There’s perfect bilateral symmetry throughout the ridges i & j intersect, for example, a and c in the figure 12.b.

The middle (a,c,b,d) and top (e,f,g,h) layers of this structure form a trapezoid figure.

While the overall shape of the wedge formation takes on the form of a trapezoid with an isosceles triangle on its uppermost surface.  The upper and lower ridges of the wedge appear as nearly perfectly straight lines running parallel to each other (Figure. 12a).

Sand dune patterns should be a given here, but it’s not the case with the keyhole structure. 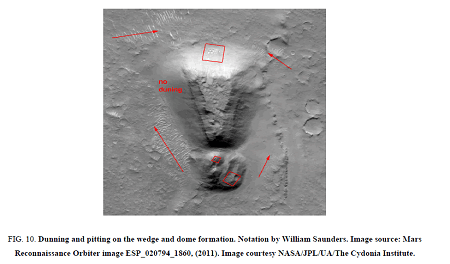 We can see the sand dune patterning surrounding the outside of the structure.

But the bottom layer lacks any patterning.

The dunes observed on the western end of the wedge indicate wind from opposite directions. One would expect to see interference dune patterning where these opposing winds meet, but that is not the case here.

He claims it’s because of natural erosion, or it’s chalked up to faulting.

McEwen states “the origin of these hills may be difficult to understand on such ancient terrain. The straight edges suggest fractures related to faults. Maybe this feature was lifted by the faulting, maybe the surrounding terrain has been eroded down over billions of years, or both .

There’s a line that runs between the dome and the wedge, but we don’t see any visual evidence of fault shifting.

I don’t see a strong confirmation in above statement if we’re dealing with only maybe’s.

There is really no visual evidence that this wedge and dome were thrust upwards by faulting. In fact, if the extended line running across the terrain (Figure. 9) is a fault line, it runs between the wedge and the dome. If one side is thrust up the other side must be down. This is not the case nor is there evidence of thrusting anywhere else along this line.

It does not seem logical to have two structures totally isolated on an open plain side by side and exposed to the same erosional forces to exhibit such dramatic, geometrically opposing shapes.

RELATED: Did The Celestial Planetary Gods Rule Our Ancient Skies? 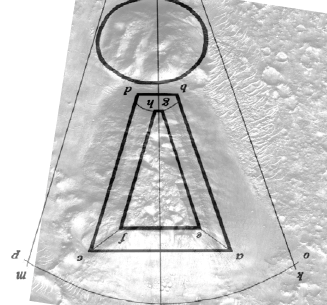 They went hard ham on an extensive search on the inner surrounding and outer terrains.

There is no other structure that’s remotely even close to this massive geoglyph.

William Saunders claims there are 3 possibilities, with 2 of them involving some glacial action or sedimentary deposits, which is a highly unlikely astronomical coincidental scenario.

What are the odds?  1 out of a gazillion?

It could have been deposited on this stark, open plane by floodwaters or possibly it was brought in by some unknown glacial action. The grand size of the keyhole-shaped formation and its vast, desolate terrain leaves these first two possibilities in question. These two opposing shapes would have to be deposited in the exact position to create the recognizable keyhole signature.

The next problem is the formations opposing surfaces. Each of these rock formations would have to be of a different composition or were acted upon by separate forces to produce such radically opposing shapes. The circular dome-shape is highly degraded, while the sharp, linear edges of the wedge structure indicate it has undergone very little alteration.

This leaves a third explanation, which suggests that it was intentionally transported and positioned by intelligent forces. –William  Saunders, Geomorphologist From Calgary Canada 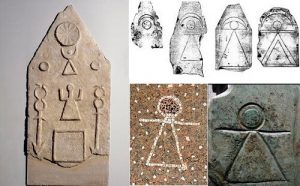 The earliest motif of this structure comes from our very own ancient Punic/Phoenician/Carthage civilization.

The signs of Tanit is directly connected to the Goddess Ishtar/Isis/Venus.

This structure is comparable to our own planet’s ancient historical tombs Of Kofun in 400 A.D.

The Kofun tombs portray the same 3 (Mar’s bottom layer is eroded) layered geometrical figure as the keyhole on Mars. 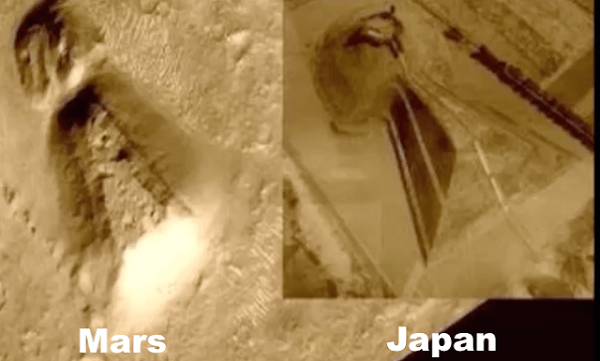 It’s possible that there’s a gigantic piece of legacy missing from the puzzle of the ancient past of glyphs shared between the 2 worlds.

Japan isn’t the only location with the keyhole glyph.

In Saudi Arabia we have another keyhole glyph thought to be 6,000 years old. 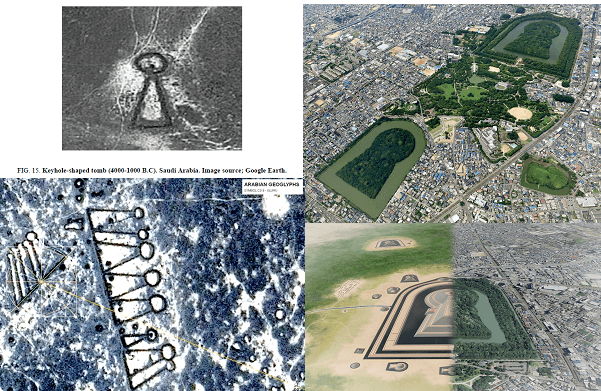 We conclude that the structural mechanisms that produce the wedge and dome formation at Libya Montes are highly unusual and exhibit a level of geometry and symmetry that is unequaled within Martian aerography.

We recommend that both NASA and the imaging team at the University of Arizona direct the current MRO spacecraft acquire addition images of this anomalous surface feature. New images should be acquired at different times of day and under various sun angles for further analysis.