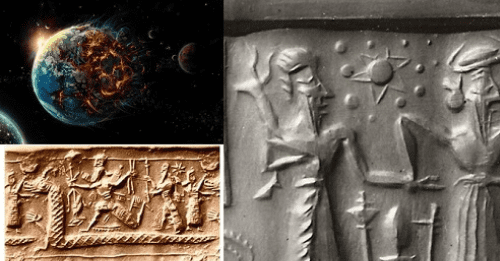 Sometimes the truth is stranger than the myth.

New growing evidence reveals of the giant impact hypothesis which states a Mars-sized planet collided with a young Earth which gave rise to some of the ancient cosmological myths pertaining to the stars.

It’s no secret that ancient civilizations like the Egyptians were no strangers to cosmology.

The ancient Sumerians, Phoenicians, Babylonians etc. shared similar mythology, since they all starting 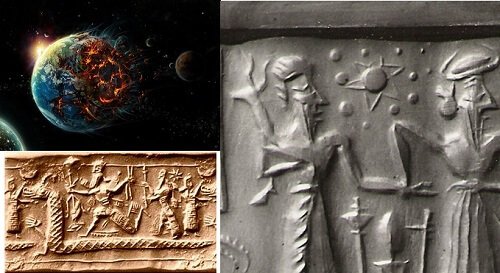 originating in Mesopotamian starting with Sumer.

Most of the ancient Babylonian myths are allegories based on cosmological/cataclysmic solar events.

The Sumerians haven an inscribed an ancient map of the solar system right on this wall back in 3,000 B.C.

The Babylonians have a myth about a Goddess named Tiamat who was a primordial goddess of the Babylonian creation myth mentioned in the Enuma Elish tablet 1-7 about 3,500 years ago, which helps form the Earth/Moon and the heavens (Solar system).

Tiamut, the mother of them both Their waters were mingled together, And no field was formed, no marsh was to be seen; When of the gods none had been called into being, And none bore a name, and no destinies were ordained; Then were created the gods in the midst of heaven, Lahmu and Lahamu were called into being.

The legendary myth on the tablet reveals a myth on how Marduk (Jupiter) kills Tiamat the Earth as her weeping tears of defeat became the Euphrates river. 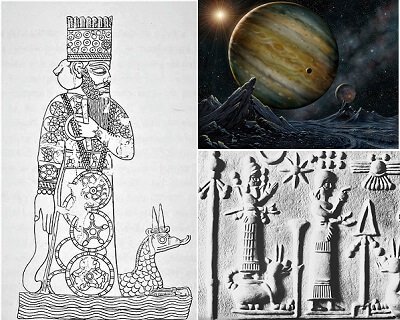 Marduk had a net, bow, mace and the 4 winds when he went to face Taimat, who appeared in dragon form.

Marduk drove 4 winds in her mouth and she exploded like a bomb after a shot through her heart with an arrow.

A theme repeated throughout world mythologies is the creation of heaven and earth through the sacrifice of a deity or primal being. Marduk split Tiamat in half and shaped heaven and earth from her ribs. Her tears became the source of the two major rivers in Mesopotamia, the Tigris and the Euphrates.

In Indian mythology, Purusha, the original being, is sacrificed by the gods and from his body are created the sky, moon, earth, sun, and the four castes of Indian society. These creation stories indicate that people have always sought a divine origin for their existence. 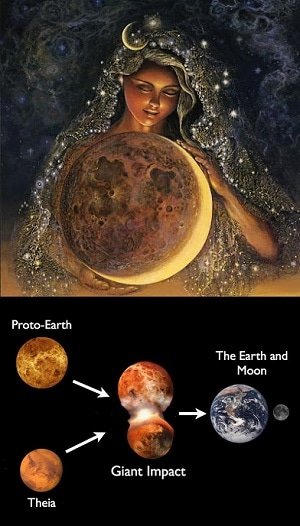 when it comes other mythologies.

In some similar myths, the ancient Greek Goddess Theia’s body turns into earth, while bearing 2 children that turned into the sun and moon.

Was the recycled motif of a goddess that turns into Earth just an allegory referencing the giant impact Hypothesis?

THEIA was the Titan goddess of sight (thea) and the shining ether of the bright, blue sky (aithre). She was also, by extension, the goddess who endowed gold and silver with their brilliance and intrinsic value. Theia bore the Titan Hyperion three shining children–Helios the Sun, Eos the Dawn, andSelene the Moon.”

The theory states that a Mars sized planet named Theia (Tiamat) collided with a proto-Earth ages about 3.5 million years ago. 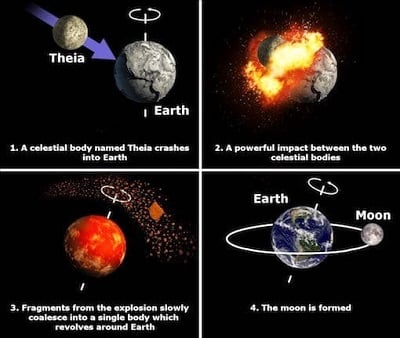 The planet split in half with half her body engulfed into earth as its iron core and the other half forms the moon (Selene) when the solar system started forming.

Was this a symbolic story of a celestial event that took ages ago?

Moreover, whereas it is mostly agreed that the core of Theia promptly merged with the proto-Earth core shortly after the impact, what fraction of and how the Theia mantle was preserved into the Earth mantle remain elusive.

This post-impact process is not only responsible for the initial thermal and compositional structures of the Earth, but also significantly affects Earth’s long-term chemical evolution. 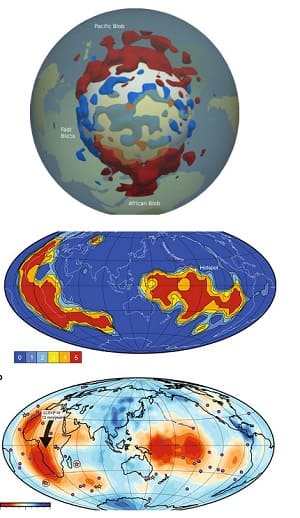 By this evidence, we can conclude the Earth seems to have ancient extra terrestrial remnants that helped formed the iron core, which the moon coincidentally consists of.

The Giant Impact hypothesis really is one of the most really examined model for the formation of Moon, but pretty direct evidence indicating the existence of the impactor Theia particularly remains elusive. First-principles modeling and predictions definitely are complicated by the uncertainty in the size and composition of Theia itself.

Here, we really demonstrate that Theia’s mantle may sort of be several percent intrinsically denser than Earth’s mantle, which enables the Theia mantle materials to sink to the Earth’s lowermost mantle and accumulate into actually thermochemical piles that may cause the seismically-observed LLSVP, which literally is quite significant.

Earth is a mixture of different unique compositions of elements accumulated in certain regions within the mantle.

If we combine the mass of Earth’s LLSVP and the moon, then we get about a mars sized Theia which is more favor of the myths created from a giant planetary impact.

The newly formed Earth would be 2- 3.5 % denser from the LLSVP sinking,  because of the heavier iron element, and reforming itself inside the Earth’s deep mantle.

We calculate the mineralogy and density for Theia’s mantle and Earth’s mantle using the thermodynamic modelling program PerpleX, the thermodynamic dataset from, and two different geotherms, Since Fe is the heaviest of the major elements, the FeO-rich Theia mantle compositions are systematically denser than the bulk silicate Earth (BSE) throughout the mantle.

At most mantle depths, the Theia mantle compositions are ~2.0 – 3.5% denser than the BSE, which is consistent with the required density anomaly of ~1.5 – 3.5% as constrained by geodynamic simulation. 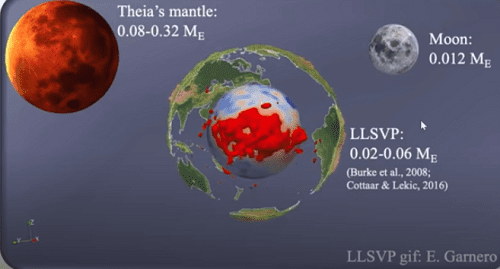 The deep mantle contains differences in noble gases of neon and xenon and helium form these oceanic island basalts (OIBs) that helped jumpstart the Earth 4.5 billion years ago.

However, increasing studies of noble gases, such as neon, xenon and helium, show less degassed primordial characters of some oceanic island basalts (OIBs) than the middle ocean ridge basalt (MORB) established by 4.45 Gyr initial thickness of TMM (Theia Mantle Material) in the range of 350 km and 500 km.

Is it possible the giant impact theory and the ancient myths are one in the same?

How did the ancients know about this theory if this is what the allegories meant?

There seem to be some plot holes within the story that doesn’t fit the puzzle.

It’s possible that only a few knew about the Earth’s genuine mysteries, but we’re talking about a very slim Jim to coming to that conclusion.

They didn’t have to the tech to study lunar rocks, seismic activities of the earth, or thermal signatures etc.