Where did the concepts of Tarot originate from?

The tarot is a hot melting pot of Hermetic/Jewish esoteric symbolism with images that refer to ancient pagan (Sumerian) mythologies.

The Purpose Of Tarot:

The Marseille Tarot is the result of one or more attempts to copy imagery in Sumerian and Babylonian cylinder seals and other artefacts from that civilization.

The Marseille tarot was the first version of the tarot cards we know of.

It wasn’t an exact copy-cat of the ancient Sumerian seals, but some cards were suspiciously comparable.

Origins Of Tarot: World Tarot Card Is A Reference An Ancient Sumerian Cylinder Seal Of Innana 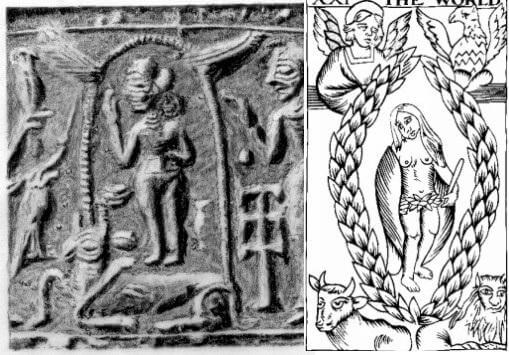 The woman in the center encircled by the 4 figures is most likely a reference to the Sumerian goddess Inanna.

It’s no coincidence the world card references the 4 biblical mystical figures in the Judeo-Christian religion.

The figures made their first cinematic debut in the Marseille cards as well as the modern versions of the tarot.

Alternatively the composite elements were carved into mythic creatures such as the ancient Egyptian, Greek and Babylonian sphinxes of antiquity depicting bull-like bodies with birds-wings, lion’s paws and human faces.

The animals associated with the Christian tetramorph originate in the Babylonian symbols of the four fixed signs of the zodiac: the ox representing Taurus; the lion representing Leo; the eagle representing Scorpio; the man or angel representing Aquarius. In 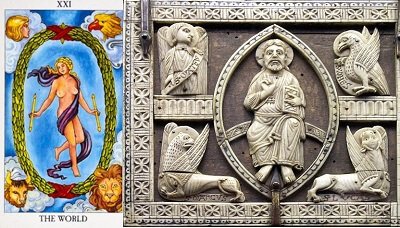 Western astrology the four symbols are associated with the elements of, respectively Earth, Fire, Water, and Air. The creatures of the Christian tetramorph were also common in Egyptian, Greek, and Assyrian mythology. The early Christians adopted this symbolism and adapted it for the four Evangelists as the tetramorph, which first appears in Christian art in the 5th century, but whose interpretative origin stems from Irenaeus in the 2nd century. 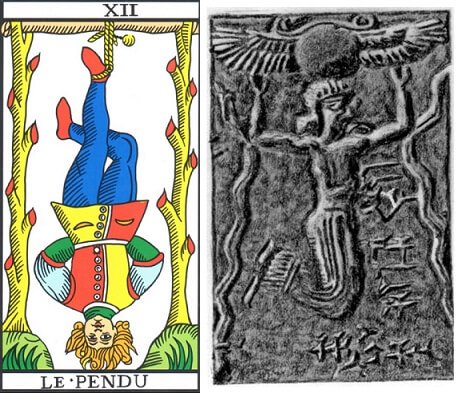 Some think the hanged man motif stemmed from the myth of the Babylonian God, Adad.

The Islamic religion recycles the hanged man motif  through campfire tales of Harut and Marut.

Unlike the Sumero-Babylonian stories of the Tower of Babel and the Flood, the Harut and Marut tale didn’t make it into the Hebrew Bible. It was, however, preserved in the Islamic tradition.

One is about a pair of angels in Babylon, Harut and Marut, who mocked humans for their frailty, and were sent to Earth to find out what it’s like. Bad things happened, leading them to do worse; finally, they had to choose a punishment: eternal later, or temporary now. Being pragmatic angels, they chose the latter.

The Norse mythology of Odin is another symbolic golden key figure to the hanged man motif.

He sacrificed his eye in Mimir’s well and he threw himself on his spear Gungnir in a kind of symbolic, ritual suicide. He then hanged himself in Yggdrasil, the tree of life, for nine days and nine nights in order to gain knowledge of other worlds and be able to understand the runes.

Origins Of Tarot: The Lovers Card Is A Reference To Judaism’s Adam And Eve And The Sumerian Temptation Seal

Set your eyes on the imagery in the card.  Notice any religious symbols?

We have the garden of Eden with the tree of good and evil.  Adam and Eve stand under the archangel Rafael. 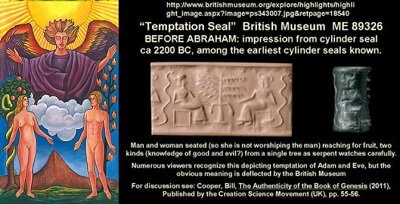 And the reptilian snake enwraps its slithering body around fruit tree right beside her.

As the myth goes, the serpent offers the fruit (tree of good and evil) to Eve, tempting her to take a bite.

The archangel Rafael, representing the higher self, oversees the two lover’s union. The imagery of the Lovers card is evocative of Adam and Eve in the Garden of Eden. Behind the male figure, a flaming tree represents knowledge, passion, and vitality. Behind the female figure, a snake twists around an apple tree symbolizing 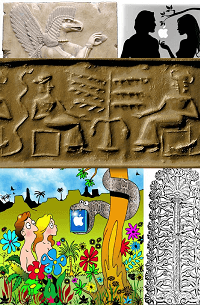 This imagery has been reproduced in various forms throughout history (such as in the image to the right, c. 320 c.e.)—whether in the more literal form of Adam and Eve or embellished for added ritual significance (such as seems to have been the case with the above seal—the male figure given horns as a deified individual). Assyriologist George Smith (1840–1876) of the British Museum wrote of the seal:

“We know well that in these early sculptures none of these figures were chance devices, but all represented events or supposed events, and figures in their legends; thus it is evident that a form of the story of the fall, similar to that of Genesis, was known in early times in Babylonia.”

Scholars think the Romans created the tablet 2,000 years ago, which was made from bronze, enamel and silver.

It’s possible the Bembine tablet had an impact on the creation of the tarot.

Also, the Romans and Egyptians had an intimate cultural relationship. 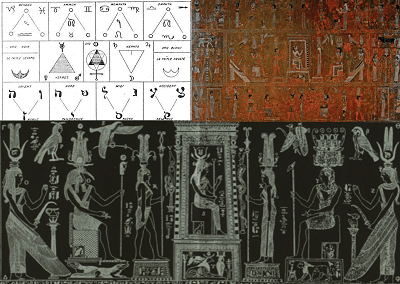 It is quite remarkable that Museo Egizio in Turin, one of the largest and most important Egyptian museums in the world, acknowledges the significance of the Table of Isis as its first most notable artifact and the kernel of the entire collection.

To him the Book of Thoth was a résumé of the esoteric learning of the Egyptians, after the decadence of their civilization, this lore became crystallized in a hieroglyphic form as the Tarot; this Tarot having become partially or entirely forgotten or misunderstood, its pictured symbols fell into the hands of the sham diviners, and of the providers of the public amusement by games of Cards.

Origins Of Tarot: The Esoteric Judaic Influence On The Tarot 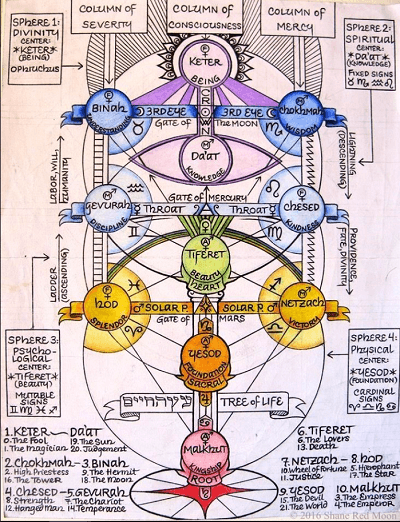 The Kabbalah are mystical collections of writings based off the Jewish religion.

One of the foundations of their teachings is the tree of life which contains a “sefirot” aka an emanation of God/Individual consciousness.

Each of the tarot cards is assigned to each sefirot or emanation.

Each sefirot are complex shades of personalities and states of consciousness etc.

The medieval kabbalists believed that God’s self could not be understood, but God has revealed attributes that interact with each other and the world. These are known as sefirot. Just as human beings are made up of various internal traits or tendencies of personality, all of which interact with one another, so too God is made up of various internal traits or “drives.” The imagery used to describe the sefirot and their relationships is often visual and physical, even sexual.

The tarot and Rider-Waite was an occultist that birthed one of the most popular deck. 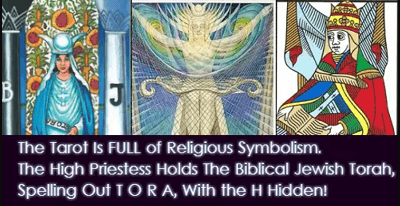 Tarot scholars put much emphasizes on the esoteric symbolism behind the tarot cards.

The eastern mystic concept of ying and yang is represents the 2 pillars between her named Boaz and Jachin.

That scroll in her lap spells out “Torah” as the H is hidden within her veil.

the two pillars are black or dark, and white or light – two terminological counter-parts used as metaphors for a whole host of historical attributions. Already we can guess from traditional assignations of gender temperament that the dark pillar is going to be the feminine (the unknown, the hidden, the mysterious, Freud’s “dark continent”) and that the white pillar is going to be associated with the masculine,

The foundation of the tarot was originally based on symbolic motifs.

Those symbolic motifs took on a different tone as they were self reflected in the individual and became a tool/journey of self-transformation.

Regardless of the purpose of the cards, I’ve always find it fascinating the original creators took theological/mythical concepts.

The number of theological/esoteric symbols increased in future creations of the deck, especially the Rider-Waite and Crowley deck.