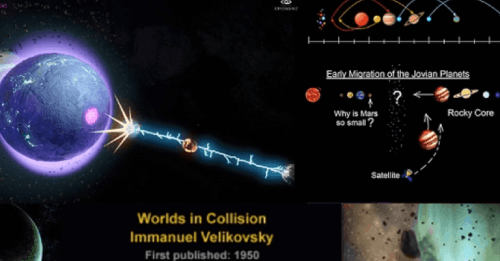 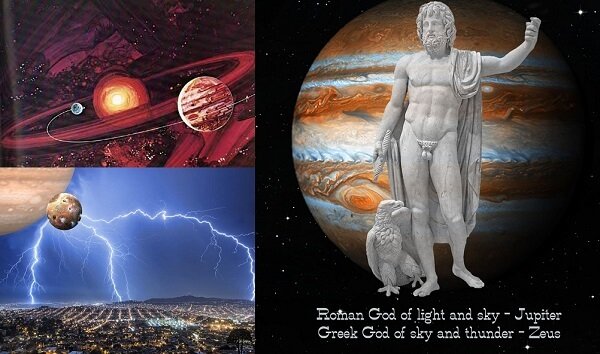 and stars within their ancient tablets/ruins expressed through mythical allegories.

Jupiter is a celestial body recognized as a solar god in the ancient Sumerian, Babylonian, Greek, Roman etc. times (Along with other world cultures who share the same myths).

In Greco-Roman mythology Jupiter is the king of the gods, a deity who destroyed an older race of titans to become the jealous and vengeful lord of heaven and Earth.

Strange though it may seem, scientific theory lends credence to this historical fiction. As the largest, heaviest object orbiting our sun, Jupiter’s namesake world is the lord of planets, a dominant force in the solar system. Eons ago, while flinging leftover debris from planetary formation out of our solar system, Jupiter probably also tossed some down toward our primordial globe, delivering some of the water that now fills our oceans.

Jupiter Migration: The Overthrowing Of A God: Jupiter Over Throws Saturn 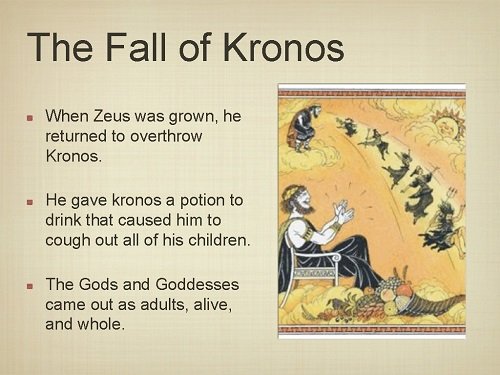 replacing the position and celestial power of another of a father God.

Zeus (Jupiter) of Greek mythology is one of the most notable figures who overthrew his father, also Indra of Hindu mythology who shared the same fate as Zeus

Jupiter’s origins were largely identical to the tales of Zeus’ creation. Before Jupiter, Saturn reigned supreme as the god of the sky and the universe. Of course, it had not always been that way. Before Saturn, his father Caelus (meaning “heavens”) ruled, but Saturn overthrew his father and took control of the heavens for himself.
Mythopedia.com/roman-mythology/gods/jupiter/

If we can view it as Jupiter replacing Saturn, his father and repositioning the 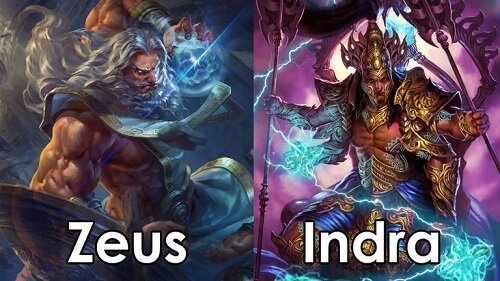 celestial bodies in the solar system by planetary migration of chaos and destruction.

What followed was the worst case of indigestion in the history of mythology. Unable to digest the rock, Saturn regurgitated it, along with the five children he had swallowed—Ceres, Juno, Neptune, Pluto, and Vesta. Jupiter, meanwhile, had been plotting his father’s imminent demise. With the help of his brothers and sisters, he defeated Saturn and took control of the cosmos. 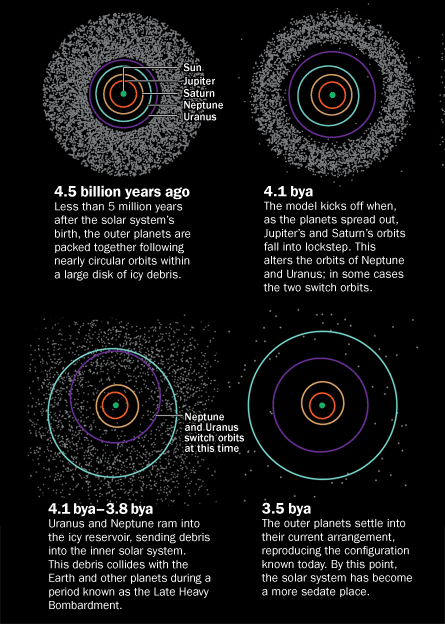 gathering in one place completely immobile within their gravitational fields to create planets in which they orbit around a young sun 4.5 billion years ago.

A group of astrophysicists from France developed the Nice model theory (Named for the location of the Observatoire de la Côte d’Azur that was initially developed in 2005  in Nice, France).

Then a team of U.S. astronomers, Dr. Konstantin Batygin, an assistant professor from the California Institute of Technology, and Dr. Gregory Laughlin, a faculty professor at the University of California, Santa Cruz, ran a series of computations along with numeral factors simulated the evolution of the solar system in 2005.

The Nice 2 model resembles the original Nice model in that a late instability of the outer Solar System results in gravitational encounters between planets, the disruption of an outer planetesimal disk, and the migrations of the outer planets to new orbits.

However, the Nice 2 model differs in its initial conditions and in the mechanism for triggering the late instability. These changes reflect the analysis of the orbital evolution of the outer Solar System during the gas disk phase and the inclusion of gravitational interactions between planetesimals in the outer disk into the model.

The grand tack model (Proposed in 2011) claims the giant planets were orbiting much closer to our sun, which were forming from gaseous proto-planetary disk in which they gravitate their course of motion inwards/outwards from and to the center of a young solar system. 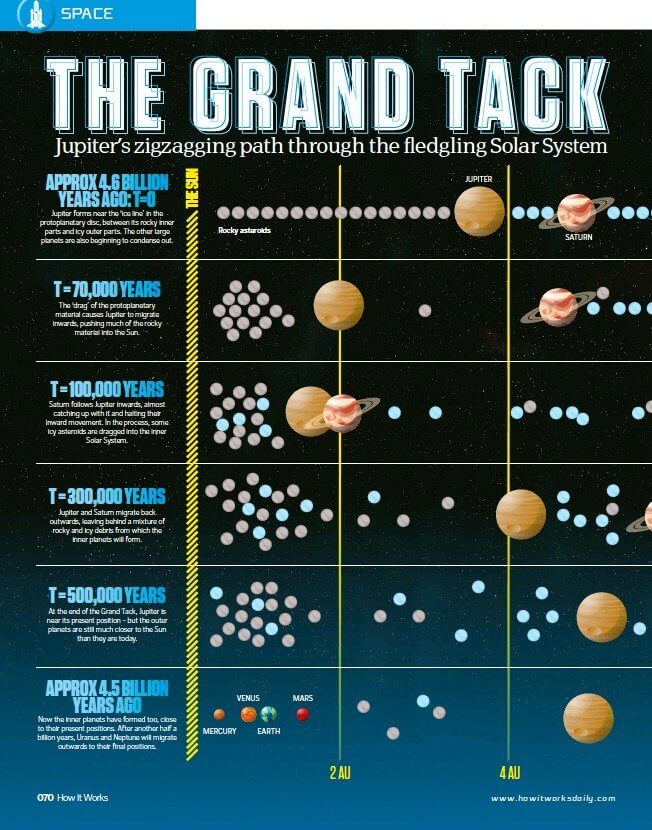 Jupiter forms from the gas disk and makes its way towards the center of the solar system as Saturn forms as well.

Both planets enter a gravitational tug-of-war orbital resonance and both go inward and outward from the center.

The chaotic gravitational alignment causes the orbital instability of Neptune and Uranus, pushing them out to the further regions of the solar system.

In the same way, as Jupiter moved away from the sun, the planet nudged the asteroid belt back inward and into its familiar location between the modern orbits of Mars and Jupiter.

Eventually Jupiter moves inward to 1.5 Au (Astronomical units) to where Mars is today. 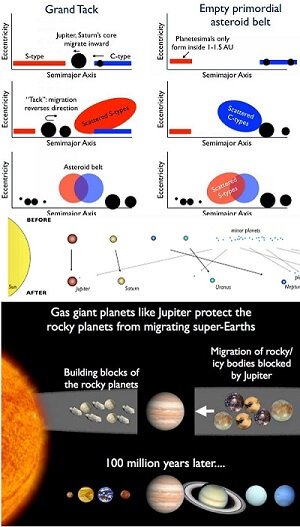 The term relates to a sailor’s sails that changes course from the natural effects of the wind which direct the ship.

The planets were better and more uniformly configured, forming a multiple series of alignments or what this theory calls an orbital resonance, causing a series of chaotic events.

Jupiter shifts Saturn out towards its present position, and this relocation causes mutual gravitational encounters between Saturn and the two ice giants, which propel Neptune and Uranus onto much more eccentric orbits. These ice giants then plough into the planetesimal disk, scattering tens of thousands of planetesimals from their formerly stable orbits in the outer Solar System.

This disruption almost entirely scatters the primordial disk, removing 99% of its mass, a scenario which explains the modern-day absence of a dense trans-Neptunian population.  Some of the planetesimals are thrown into the inner Solar System, producing a sudden influx of impacts on the terrestrial planets.

Based on this evidence, Earth might not have formed if it wasn’t without the help of Jupiter and we might’ve been a super earth too close to the sun, making life inhabitable.

Jupiter collected all the ancient debris we now see as the trojans, which inhibited the formation of other planets that could’ve halted the creation of Earth. 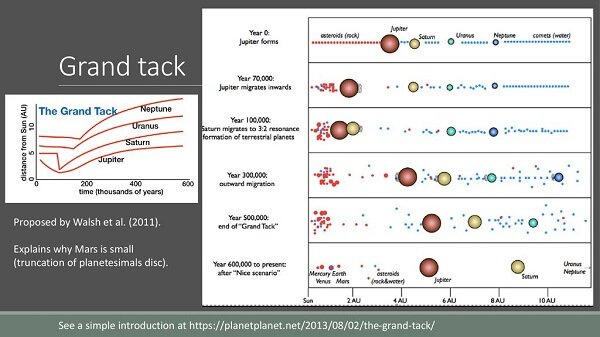 Computer simulations placed Jupiter in multiple outer regional locations of the evolution of the solar system that revealed the current outcome of Jupiter’s situation with the Trojan asteroids.

Our solar system is an anomaly compared to most solar systems, which have their planetary bodies orbiting closer to their sun, filled with super Earth’s, and lack an asteroid belt.

Jupiter Migration: Immanuel Velikovsky’s Worlds In Collision Is About An Ancient Time Of Jovian Planets In The Reigning Over Inner Solar System

Worlds in collision tells about an ancient time of the past when civilizations throughout the world witnessed a cosmological event recorded through the mythical tales and the carvings of images in the ancient ruins.

The grand tack theory and Nice model coincidentally falls in line with Velikovsky’s work and others who’ve elaborated and modified his work, like David Talbott. 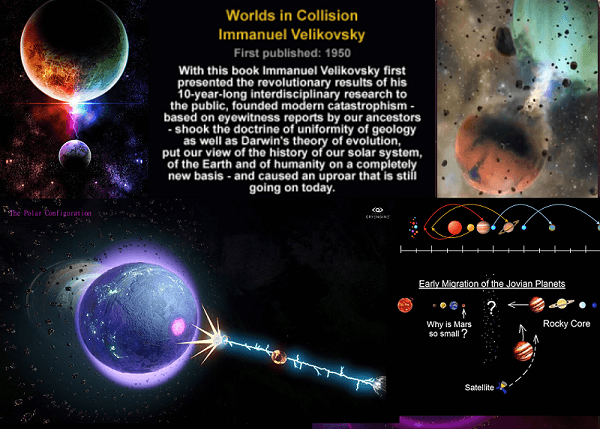 Specifically, it tells about in ancient times when Jupiter, Saturn, Mars, and Venus (Other Planets) were in close in closer proximity and, in conjunction, completely perceivable by the naked eye.

The 8 pointed star of the stick/squatter and the lightning bolt are 2 major motifs that’s shared throughout civilizations throughout different times.

Petroglyphs and ruins around the world in every culture contain carved images of celestial events. 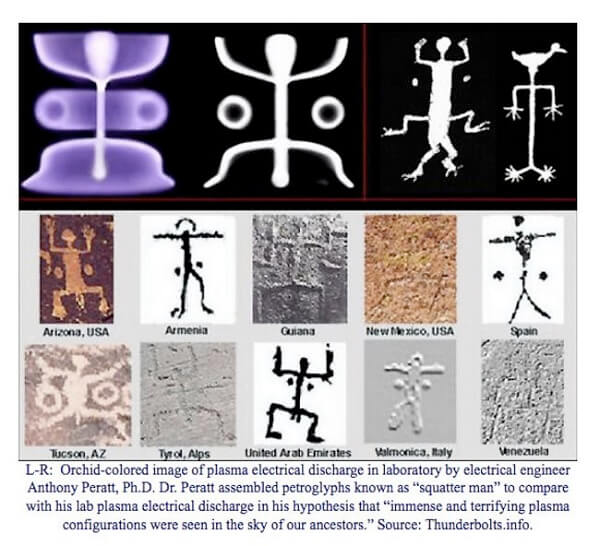 In the imagination of the ancient myth-makers, the planets were alive: they were the gods, the ruling powers of the sky—awe inspiring, often capricious, and at times wildly destructive. Cosmic lightning evolved violently from one discharge configuration to another, following patterns observed in high-energy plasma experiments and only recently revealed in deep space as well. Around the world, our ancestors remembered these discharge configurations in apocalyptic terms. They called them the “thunderbolts of the gods”.

Gaius Plinius Secundus was a Roman author, naturalist and natural philosopher, and naval commander of the Roman Empire during the reign of Emperor Vespasian.

Pliny gave accounts of the celestial events of these planets, which we got to remember there was no evidence of any telescopes back then. 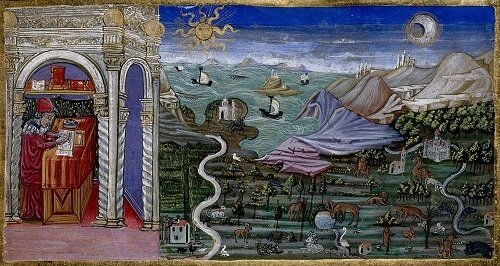 Why Lightnings are attributed to Jupiter. Most men are ignorant of that Secret which, by great Study of the Heavens, Men of deep Learning have found out: namely, that it is the Fires of the three uppermost Planets, which, falling to the Earth, carry the Name of Lightnings;

but those especially which are seated in the midst, because participating in the excessive Cold and Moisture from the upper Circle, and the immoderate Heat from the lower, by this Means he dischargeth the Superfluity: and hereupon it is commonly said, that Jupiter darteth Lightnings.

Let’s say for the sake of argument they had a telescope that can magnify 3x, then you’re telling me he can see all those lightning bolts?

Jupiter must’ve been extremely close to Earth in the past as with Saturn.

Most of Pliny’s work are historical account he’s collected over the years of research.

Only the Points and Conjunctions of iheAbsides, and the utmost Circumferences, shew a dark black. Each Planet hath a several Colour; Saturn is white, Jupiter clear and bright, Mars a fiery red, Venus glowing, when Lucifer; when Occidental, or Vesper, resplendent ; Mercury sparkling, the Moon pleasant, the Sun when he riseth, burning, afterwards radiating

For one while a Number of them appear about the Half-moon, when in a clear and calm Night she gently beautlfieth them ; and at another they are seen but here and there, in so much that we may wonder how they are fled upon the full Moon, which hideth them;

Where all these ancient petroglyphs and images on ancient ruins telling the cosmological events which astrophysicist stumbled upon in the recent years in order to explain our solar system?

But how do you explain the accounts from ancient myths and ancient geological evidence of mass destruction and floods, fires, brimstones on Earth?