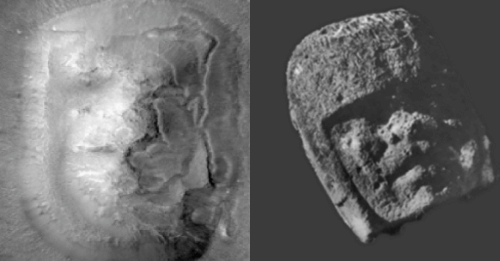 On July 25, 1976, the Viking 1 Orbiter spacecraft satellite shot up to Mars to take images of the planet and returned some notable and strange artificial looking structures.

The Viking 1 scanned over the region of Cydonia, Mars and took took images of a massive geoglyph of a face that’s located extremely close to the 5 pointed D&M 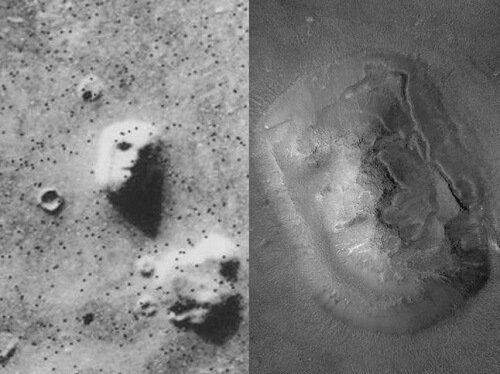 The face of mars is a bisymmetrical figure that maybe a victim of artificial design instead of a structure formed by natural erosion.

Critics state the Face cannot be a face and thus cannot be artificial because it doesn’t look like a face. Clearly if a more quantitative measure of artificiality existed an objective assessment could be made. Because artificial objects tend to be symmetrical, symmetry is a powerful criterion for assessing the artificiality of object.

Face Of Mars: Geometrical Figures Of The Mysterious Wonder

Mark J. Carlotto (Ph.D) is a scientist who works in the defense aerospace industry developing automated target recognition (ATR) algorithms that’s done some extensive work on the face of mars. 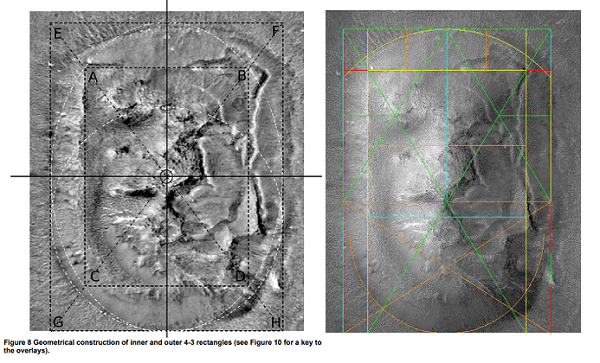 On April 8, 2001 Mars Global Surveyor (MGS) was able for the first time to obtain a fully illuminated high resolution image of the Face on Mars. Like previous MGS images the Face appears at first glance to be a highly eroded natural formation. However analysis of this new image shows the object to possess a very high degree of symmetry in two directions.

When we look for anything in massive structures, we look for the isometrics/bisymmetry which the face of mars perfectly fits the criteria.

Although large natural forming designs exist, such as pyrites that can form perfect squares, but never on a such a massive geological scale that’s never known to exist.

If we run an imaginary lines that run along the face, then we see the resulting grid forms a geometrical relationship.

The face of mars complies with the underlying geometry that’s based on 4-3 rectangles that reveal geometrical ellipses. 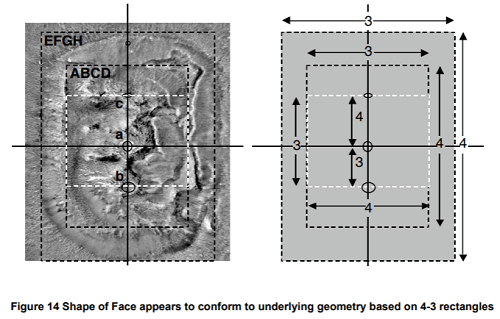 Using repeatable geometrical constructions based on clearly resolved features the Face appears to fit a consistently expressed geometrical model based on rectangles having a long to short side ratio of 4/3, i.e., by rectangles diagonally bisected by 3-4-5 right triangles.

The face of mars has an outer perimeter, which has an ellipse oval shape at the top and bottom of the structure. 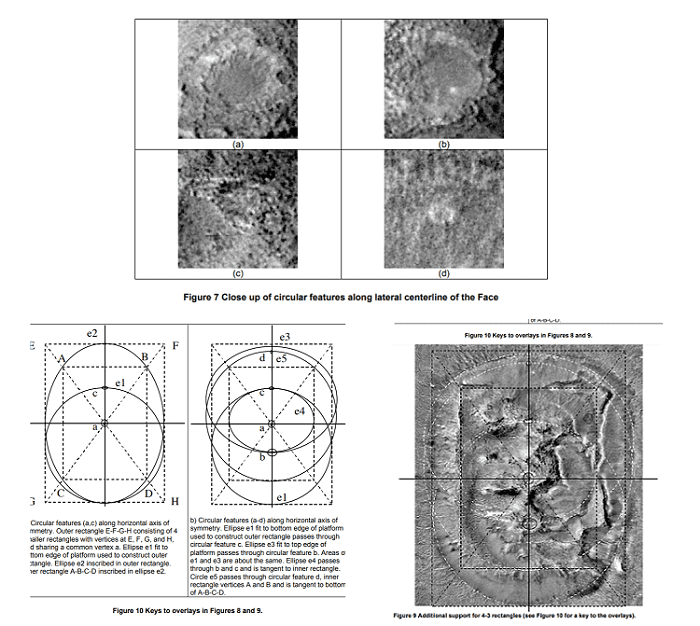 There are 4 unique other unique circular structures sit right on the vertical axis of the midline of the center face (a,b,c,d).

Examination of the shape of the bottom left edge of the base of the  platform shows it to conform to a conic section, specifically to a segment from an ellipse of eccentricity e~0.22.

The top of this ellipse e1 passes through one of the circular features c identified in Figure 6. A rectangle can be constructed whose left and bottom sides are tangent to the ellipse and opposite vertex is in the center of the central depression.

The inner A and C run a straight, uncurved vertical axis along with the outer lateral E and G in running perfectly parallel in comparison.

The top left corners of A and C also make a 90 degree right angle sharp turn in respective to each other. 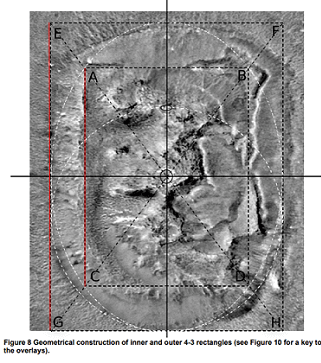 Corners B, D, F and G follow the same principle but went under much heavier wind erosion shown by the analytic data collected from by the Digital Elevation Model (DEM).

Careful examination of the image provides additional evidence supporting the hypothesis that the Face is a highly symmetrical and geometrically regular structure. The top corners of the A-B-C-D rectangle frames two rounded corners on the Face. As shown in Figure 11 the corners also appear to have the same 3-D shape.

The intersection of the horizontal and vertical axes of symmetry and the centers of rectangles A-B-C-D and E-F-G-H — both 4-3 rectangles — lie within a. These same two points of intersection within b and c together with rectangle A-B-C-D define another 4-3 rectangle which bounds ellipse e4.

The ancient Olmecs were a ancient race that date around 2,500 years 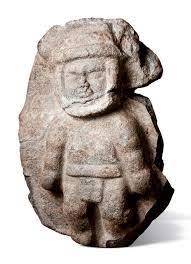 ago and there are no written records of their beliefs but we do some art and inscriptions of myths that resemble the Aztecs and Mayans.

Some suggest the Olmecs migrated from the ancient east and were the first to occupy the Americas.

The appearance of the Olmec helmets has this ancient future tech type of style look to it.

Other megalithic heads were discovered in the intervening years, all with African facial features. This is not necessarily to suggest that the founders or leaders of Olmec civilization came directly from Africa, since many original populations of countries like Cambodia and the Philippines have similar characteristics. These might have been brought along when the first humans entered the Americas from Asia.

The Olmec mythology is a polytheistic religion which comprises a variety 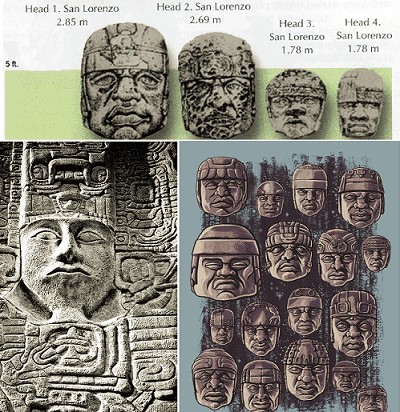 of gods ruling the land, seas, agriculture, the skies such as the feather serpent God is a popular motif that’s shared from other ancient Mesoamerica/Asian myths.

The jaguar is their own version of the Sphinx motif, which wasn’t an uncommon thing since zoolatry (Religious Animal worship/association) existed in ancient cultures of Egypt or China.

The Olmecs have shamanic beliefs of transformation to attain its senses and instincts of a certain of animal.

The most well-known aspect of shamanism in Mesoamerican religion – and in the whole of Native American shamanism – is the ability to assume the powers of animals associated with the shaman. Such animals are called nahuales, and in Olmec art the most common of these is the jaguar. In a sense, the optimal spirit would have the spirituality and intellect of man and the ferocity and strength of the jaguar.

I would say the face of Mars is just another structure of natural erosion, but there are too many discrepancies all over Mars, such as the megaliths, giant keyhole glyphs, or the 5 pointed D&M pyramids.

And considering the fact the odds of this being a natural occurring formation considering geometrical and symmetrical implications would be unimaginable.

I’d have a better chance getting to the moon, driving an ice-cream truck.

Who created these structures, which seem to have comparative beliefs to ancient civilizations on Earth?

Were the ancient civilizations some off-world alien being that thought of them as “Gods” which had shamanic abilities as well?

And could they be more human than we think?

What really grinds my gears is the fact that these findings serve a buffet of more questions than answers.