Is it possible that the pyramids are older than we thought? 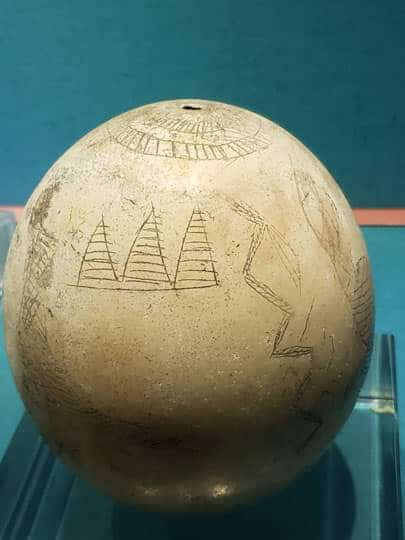 Egyptologists claim the pyramids are 4,500 years old, but an ancient relic say otherwise.

There’s a lot of commotion and controversy about if Khufu was the original builder of the great pyramids.

And there’s still no conclusive answer to if Khufu really built the pyramids or just took the credit, which happens throughout history a good number of times.

In 1907, British archaeologist Mallaby Cecil Firth discovered an ancient massive ostrich egg, dated 7,000 years ago in the tomb from the Nagada culture.

The discovery was in tomb 96 of cemetery 102, which is currently sitting nicely in the Museum of Nubia in South Egypt (Aswan). 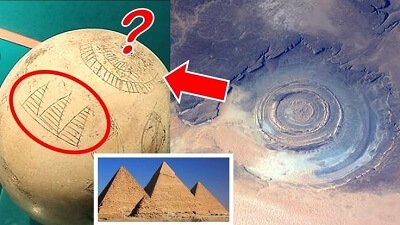 On the opposite of the egg are 3 triangles that are completely segmented by lines along with a zigzagging snake-like structure next to it.

Well — an egg has survived 6500 years, this unto itself is remarkable. However, this is not what we are talking about here. It is the carvings that were present on the egg that bring us here today.

On opposite ‘sides’ of the egg there is a depiction of three triangles with horizontal lines running across them, beside which sits a thin snake like etching on one side and a large globule etching on the other.

Mainstream historians claim the drawings are nothing more than mere depictions of mountains. 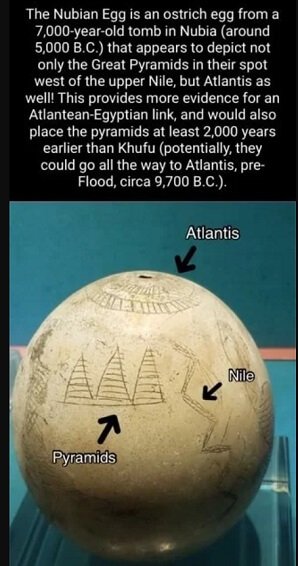 There’s another theory that states the egg is a depiction of the Giza pyramids and the Nile river.

And ancient Atlantis is supposed to be part of this egg ostrich equation.

RELATED: Sphinx Is Much Older Than Mainstream Egyptologists Tell Us

There’s a circular shaped design on top, which might represent the central lost city of Atlantis.

The triangles are simply rudimentary depictions of mountains.  I have an issue with this, while not discounting it, the symmetry of the depiction and especially the horizontal lines in the depiction tend to move my mind away from natural occurring mountain ranges.  The pyramids are actually a great deal older than we know.

How does a 7,000 year-old egg that’s that old depict something that’s supposedly been around for 4,600 years.

It would be of no surprise since there’s evidence pointing to the fact that the Richet structure was probably the center of the Atlantean civilization, which spanned throughout the globe.

Ancient Ostrich Eggs: Are They The Nubian Pyramids?

There’s another theory that they represent the Nubian pyramids, which are located close to Giza. 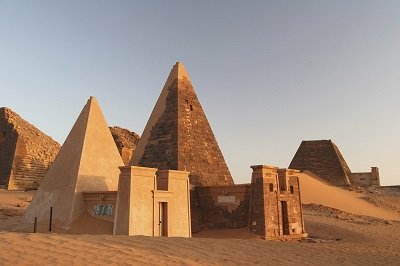 But it’s not just 3 but a bunch of Nubian pyramids that occupy the surrounding area.

You’d think we would find 3 unique pyramids that stand out from the others, but we don’t.

A collection of nearly 200 ancient pyramids stand along the banks of the Nile River in a desert in eastern Sudan. They have been the tombs of kings and queens, rulers of the Meroitic Kingdom for nearly 1000 years.

Within the north of Sudan, in an area of the Nile valley known as Nubia. The Nubian pyramids of Sudan of Meroë were said to have been built by the rulers of these ancient Kushite kingdoms, known as the “black pharaohs”

Supposedly they were built during the kingdom of kush era in 1000 B.C.

Ostrich eggs have been used for decorations, telling a mythical story or serve as geographical markers such as maps, etc. 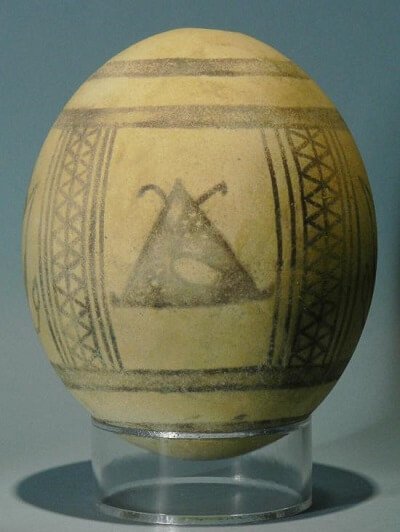 Here’s a Phoenician egg that depicts some strange type of pyramid on it that could symbolize a location.

The ancients used ostrich eggs to engrave markings for decorations, telling a mythical story, or serve as geological markers.

All the historians, mainstream and alternative, agree that this ancient 7,000-year-old egg serves as a geological marker.

There’s a lot of controversy about who built the pyramids and if Khufu built it.

If Khufu really built them, then the answer would be clear as water.

Builders of the Great Pyramid were obviously in possession of a science of measurements and a knowledge of the basic dimensions of the Earth far in advance of what we could attribute to any known ancient Civilization or Culture, and superior in many respects even to 19th and early 20th Century geodetic science.
Academia.edu/45014007/15_Reasons_why_Khufu_did_NOT_build_the_Great_Pyramid

The western papyrus is an ancient collective text dating back to the 13th Dynasty of the Middle Kingdom (2,050 to 1,750 BCE), which reveals a story about a pharaoh who was in search of a lost pyramid.

Most of their stories have the Old kingdom Khufu in it, but as an enemy in the fairy tale, not its hero.

One story involves Khufu was looking for the secret chambers of Thoth.

The western papyrus is an ancient collective text dating back to the 13th Dynasty of the Middle Kingdom (2,050 to 1,750 BCE) which reveals a story about a king who was in search of a lost pyramid.

Most of their stories have the Old kingdom Khufu in it but as an enemy of the fairy tale, not its hero.

One story involves Khufu was looking for the secret chambers of Thoth.

Thoth is an Egyptian deity, who’s known as the messenger of the gods, inventor of writing, and the bringer of knowledge.

Most of the stories contained in the papyrus have the Old Kingdom pharaoh Khufu as their protagonist. One story in particular concerns Khufu’s search for the“ number of the secret chambers in the Sanctuary of Thoth”. This is later said to be contained “ in a casket of flint in a room called the Inventory in Heliopolis.
Many researchers have seen in this passage an allusion to Khufu’s search for an entrance into the Great Pyramid, here called the “Sanctuary of Thoth”.
Academia.edu/45014007/15_Reasons_why_Khufu_did_NOT_build_the_Great_Pyramid