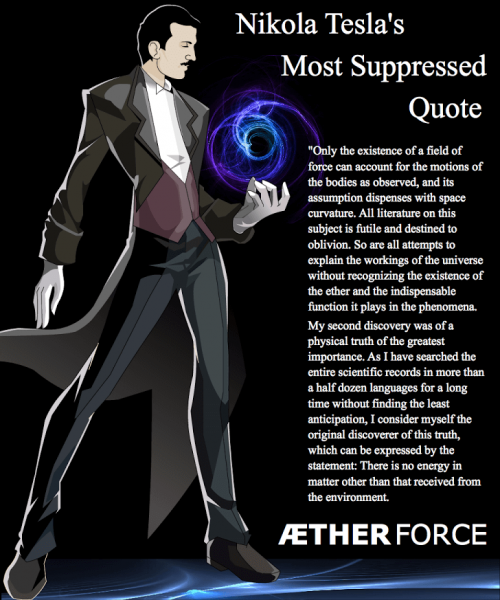 What Is The Prana In Yoga? 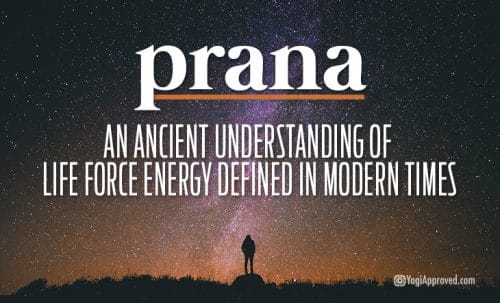 The root seed which sprouts the leaves of existence.  Prana is the masculine vital energy within every atomic matter and every being.

You can compare it to an atom’s proton.  We’re all made out of energy, as Nikola Tesla stated.

“If you want to find the secrets of the universe, think in terms of energy, frequency and vibration.” – Nikola Tesla, Physicist Engineer

Nature is our greatest teacher with her pages wide for us to read, if we dare….

What Is Prana? (Prana-Akasha Male-Female Universal Energies) The Roots Of ElectroMagnetism 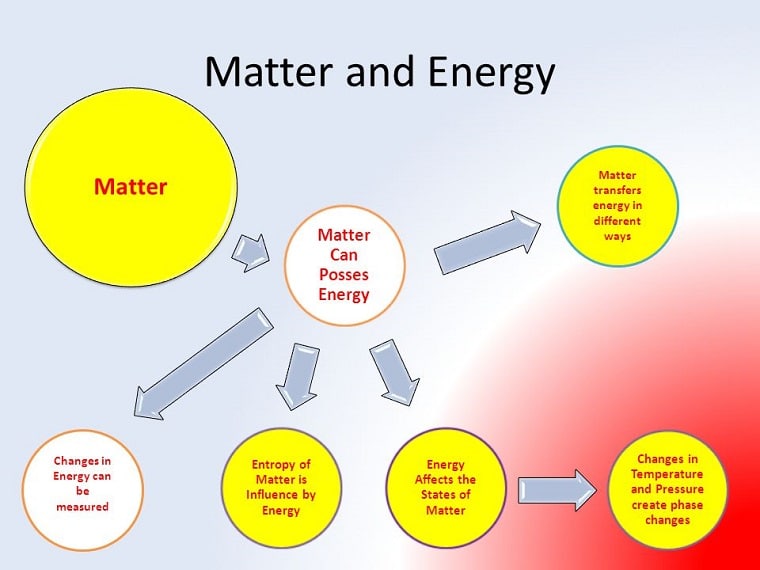 Everything has an electromagnetic signature when it comes to forming the basis of reality.

If Pranas the electrical aspect(active principle), then Akasha is the  feminine magnetic aspect which births the masculine energy into existence.

I’m talking about tangible existence on ALL levels of reality, and not just limited to the physical universe.

“All perceptible matter comes from a primary substance, or tenuity beyond conception, filling all space, the akasha or luminiferous ether, which is acted upon by the life giving Prana or creative force, calling into existence, in never-ending cycles all things and phenomena.” – Nikola tesla

I’m also including any higher planes of metaphysical energies stacked above this physical universe. 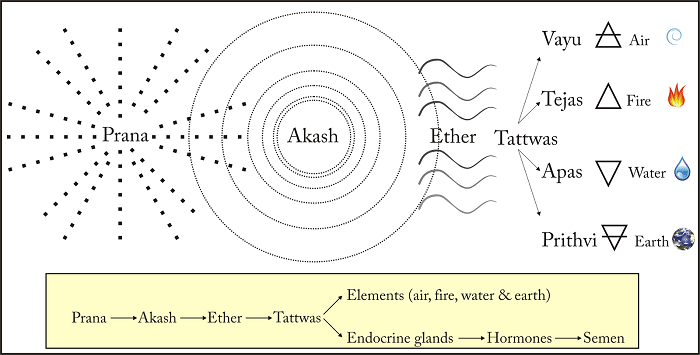 You can think of prana as the blueprint of a building or any type of architecture/structure.

Both forces co-exist as one and one can’t do without the other to “exist”.

Akasha and Prana are 2 wings of the same bird, like an atom with a positive central (proton) and a negative terminal (electron).

Prana is the masculine active energy behind every proton.  Everything in reality has a dual nature which evident all around us.  Nature again, never lies.

Prana taking its role as the energetic essence.  Again, without Akasha (the feminine  passive aspect), nothing objective can exist.

Akasha is the tangible substance needed to birth of the energetic creation.   She’s the garden that flowers the masculine seeds of Prana.

The electron is the feminine aspect of  an atom which is birthed from Akasha.   We’re talking about a trinity of energies. 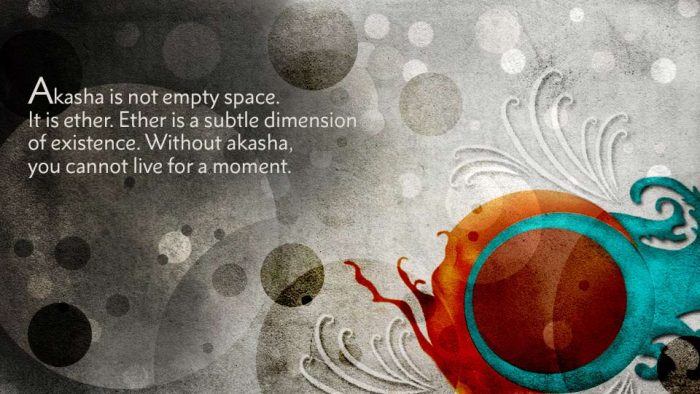 Physical matter is only one octave of a set of energies which also exist on higher dimensional of reality.  But I’ll keep it simple and discuss the electromagnetism of physical matter.

We now come to the exercises in Pranayama. Sit upright; the body must be kept straight. The spinal cord, although not attached to the vertebral column, is yet inside of it. If you sit crookedly you disturb this spinal cord, so let it be free. Any time that you sit crookedly and try to meditate you do yourself an injury. The three parts of the body, the chest, the neck, and the head, must be always held straight in one line. You will find that by a little practice this will come to you as easy as breathing. The second thing is to get control of the nerves. We have said that the nerve centre that controls the respiratory organs has a sort of controlling effect on the other nerves, and rhythmical breathing is, therefore, necessary. The breathing that we generally use should not be called breathing at all. It is very irregular. Then there are some natural differences of breathing between men and women. – Swami Vivekananda

What Is Prana: Where Does The Power Lie In.

Prana is in everything as we discussed.  Prana is in the food we eat and the air we breath.

Many don’t know this fact, but Nikola tesla studied under a mystic and learned the truth about the metaphysical mysteries.

Personal Power – Our mental states are everything.

Everything rests on our personal power – Don Juan Matus.  Personal power is lost to those who give into such reckless drama causing energy drainage.

Any emotional baggage we shoulder weighs down our personal power.

Here’s a few quotes from my favorite shaman Don Juan Matus you can dig your eyes into:

Personal power depends on impeccability. Impeccability consists in efforts to change, in order to scare the human form* and shake it away. After years of impeccability a moment will come when the form cannot stand it any longer and it leaves.

What Is Prana Within The Sexual Fluids

What were we told in high school the number 1 reason why we have sex?  The first and foremost reason is to reproduce, NOT for pleasure.  Remember that.

The pleasure part is just the extra bonus that comes with it.  But if you constantly act in animalistic behavior, then you’ll be nothing more than that. 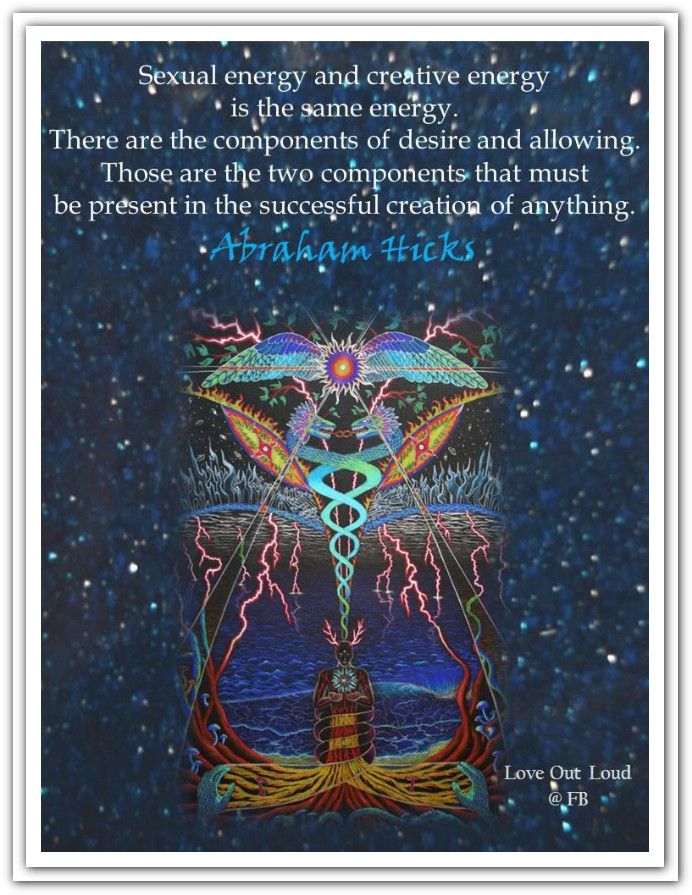 Wasting not only the energy but the sexual dopamines your brain produces and you start to totally numb out to things eventually.

I myself attest to that.  The metaphysical energies are highly active in the sexual fluid.  And why wouldn’t it be?  It’s the power to create and reproduce new life! 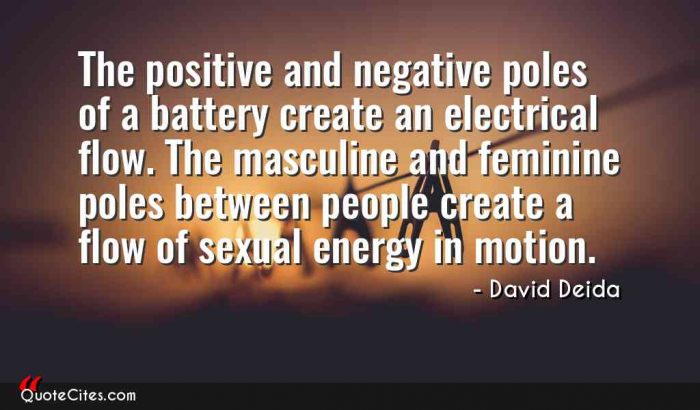 So you can only imagine the amount of energy stored in the sexual fluids.  Swami vivekananda and other mystics emphasized the importance of sexual energy.

Where do you think Tesla learned all his secrets about the nature of reality?

Sexual energy has nothing to do with morality, but has everything to do with saving energy and using it for mystical practices (lucid dreaming, astral projection, magick etc.).

Sexual energy is something of ultimate importance and it has to be controlled and used with great care. Don’t resent or applaud what I say, thinking that I am speaking of control in terms of morality; I mean it in terms of saving and rechanneling energy. I recommend, therefore, that one control oneself and understand the Indescribable Force’s command that sex is for bestowing the glow of awareness. It is the Indescribable Force’s command that sexual energy be used for creating life. – Don Juan Matus

Nature has condensed one of its most powerful manifestations of prana into reproductive energy, as its purpose is to create. The greatest amount of vital force is concentrated in the smallest area. The reproductive organism is the most powerful storage battery in animal life, and its force can be drawn upward and used, as well as expended in the ordinary functions of reproduction, or wasted in riotous lust.  – William Walker Atkinson

As I stated Prana is in every matter, particle etc.  Prana is more concentrated in other physiological aspects than others.  The breath is another conduit where prana is highly concentrated.

Breath controls everything.  Regulates your whole body.  It’s the first source and the most immediate used for energy.

You can live days without food, yet you can’t live seconds without air.  A lot of yogi instructor emphasize the proper control and use of breath.

Supposedly after practicing breath control, the yogi can send that breath of energy an increase flow of prana energy through the breath.

He knows something about “prana,” of which his Western brother is ignorant, and he is fully aware of the nature and manner of handling that great principle of energy, and is fully informed as to its effect upon the human body and mind. He knows that by rhythmical breathing one may bring himself into harmonious vibration with nature, and aid in the unfoldment of his latent powers. He knows that by controlled breathing he may not only cure disease in himself and others, but also practically do away with fear and worry and the baser emotions. – William Atkinson

Take advantage of the the pranic and akashic powers bestowed upon you.  Meditate and keep programming yourself into higher levels of buddha consciousness!