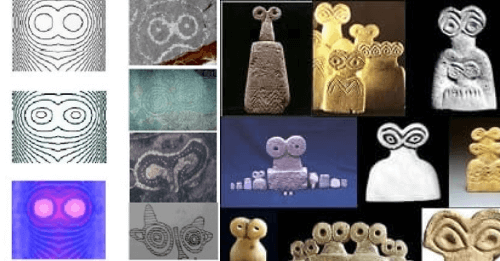 Wide Eyed Relics And The Ancient Symbolism Behind Them 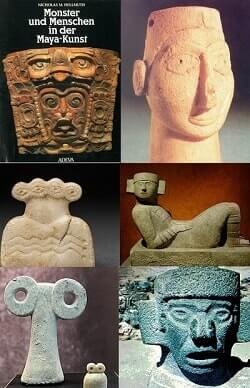 One of the weirdest motifs we find in the ancient realm shared by many civilizations worldwide is the strange E.T. looking eye statues.

Why were these statues and art of the wide-eyed beings created all over the world and did ancient civilizations share the same of myths through different variations?

In comparative mythology, that’s the case for my religious myths and their reboot like a movie.

Sometimes these wide-eyed creatures have their hands to their side or even hold open a vaginal canal to possibly symbolically represent creation.

The eye idols are one the strangest archeological finds, dating back to the early as 6,000 years ago in middle Northern Uruk period 4,000 – 3100 B.C.

Professor M.E.L Mallowan discovered the eye idols during excavations in 1937-1938 of Tell Brak in 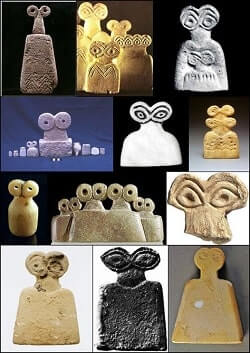 North Syria at the Eye-temple Complex.

In his excavation report published in 1947, he reveals he discovered 1000s of these artifacts.

One of the earliest insights was that the Eye-Temple complex was dedicated to an ‘Eye’ divinity, a deity or deities of unknown gender that was directly associated with the eye image, either in a literal sense, of being directly linked with aspects of sight or of healing the human eye.

On a more symbolic and probable level it is likely that the prominent eye feature was representative of the themes often associated with the divine such as omnipotence and being watched over by an unknown deity or deities. 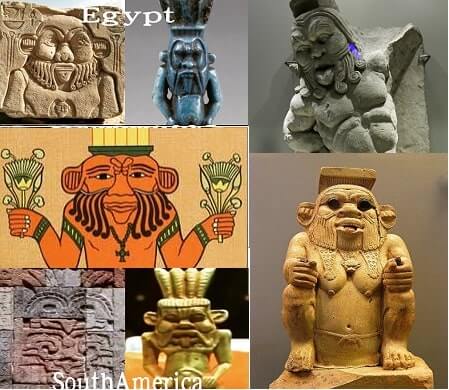 over fertility, sex, war and usually depicted as a dwarf giant associates with music, dancing.

Strangely, there were no temples really in his name, but there are sculptures and noted as one of the more popular gods, but not enough to give him his own mansion.

Regardless, there is no clear original date of the worship of Bes.

Beset is his feminine counterpart, who wards off spirits, ghosts, and dark magic.

Ancient MesoAmericans were no strangers to the ancient symbolic motif of the wide-eyed gods.

The Aztec, Mayans and even the Olmecs have their fair shares of creating statue faces of the same motifs 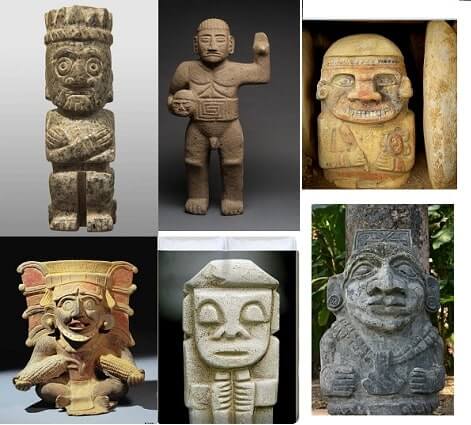 we find in the ancient middle Eastern worlds of Mesopotamia.

Tlaloc is an Aztec Rain/Thunder God that resembles The Egyptian God Bes of Bes, both being a god of fertility.

The Great Goddess of Teotihuacan is a goddess of the same motif in the pre-Columbian Teotihuacan civilization (ca. 100 BCE – 700 CE), where Mexico is as she was a Goddess of Rain/Warfare just like Bes or Tlaloc.

Kekchi Mayan Yaluk is the grand God of thunder, and the father of other thunder gods while him being the original primo supremo. 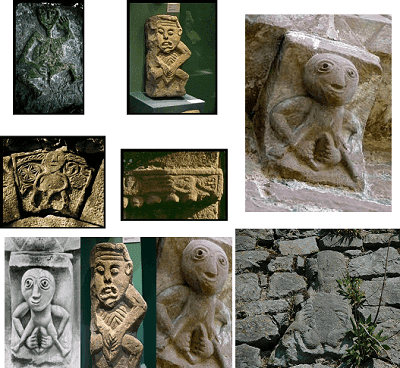 questions marks above their heads for decades.

Similar to gargoyles, these sculptures on are top of buildings or door entrances.

These Sheela na gig are a feminine type of being of which has her hands opening her vaginal canal, which might represent creation/rebirth.

Some suggest the Sheela na gig is an ancient pagan Celtic goddess of war and fertility, which the 2 seem like a shared common theme among ancient civilizations all over the world. 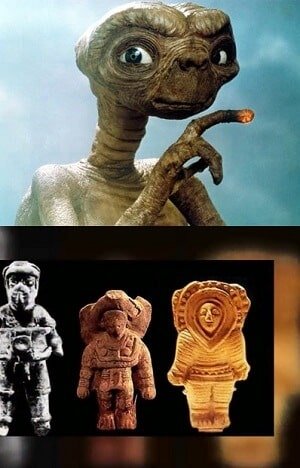 visited the planet long ago as there is firm evidence of civilization on mars that might suggest an alien civilization.

These alien entities could’ve visited planet Earth and even contributed to life on this planet.

Or these alien entities are not from this plane and come from another time and space which they can freely jump from one to another.

If you symbolically associate the Gods with alien/metaphysical entities, then I can see that it might be a possibility, but we have little specific details or historical evidence to by to make that connection.

The terms “Gods” would almost take on a literal meaning, instead of a symbolic one.

Immanuel Velikovsky’s book “Worlds In Collisions” discusses a time when ancient civilizations witnessed a celestial alignment of Saturn, Venus, Mars that reigned as solar giants as big as the sun in our Earth’s ancient skies. 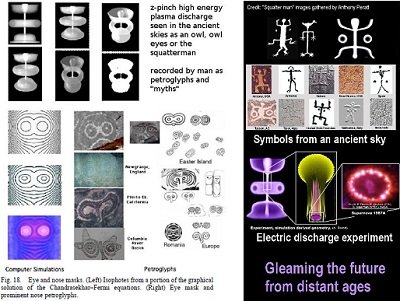 Experiments of plasma electric discharge of corona discharge creates aurora formations such as the motif Squatter-man.

Since the ancient days of Mesopotamia, ancient civilizations thought of the planets as “Gods” and continued to carry out the Egyptian, Celtic, Norse, Meso-American, Eastern, Greek/Roman mythologies.

A lot of other people have elaborated on his work such as nuclear physicists Wal Thornhill, or David Talbot, among many others who elaborated on Velikovsky’s work.

Albert Einstein even help consult Immanuel’s work even though Einstein himself wasn’t an advocate of his theories but, oddly still contributed. 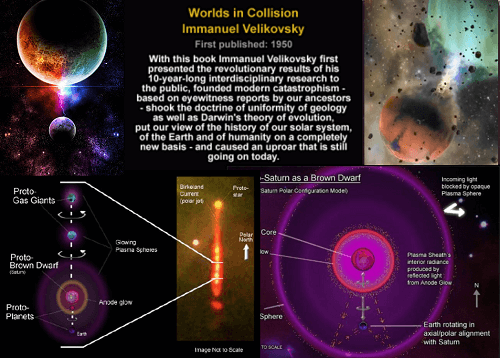 The core teaching of this theory states that when these planets aligned together, they would create electrical plasma discharges between them, which gives off aurora formations that contributed to the ancient myths throughout civilizations.

A mix of Both

There are the weirdest anomalies on Mars that suggest an ancient alien civilization might have existed.

For example, the keyhole glyph or the face of Mars from Cydonia, among other weird structures, are found all over Mars.