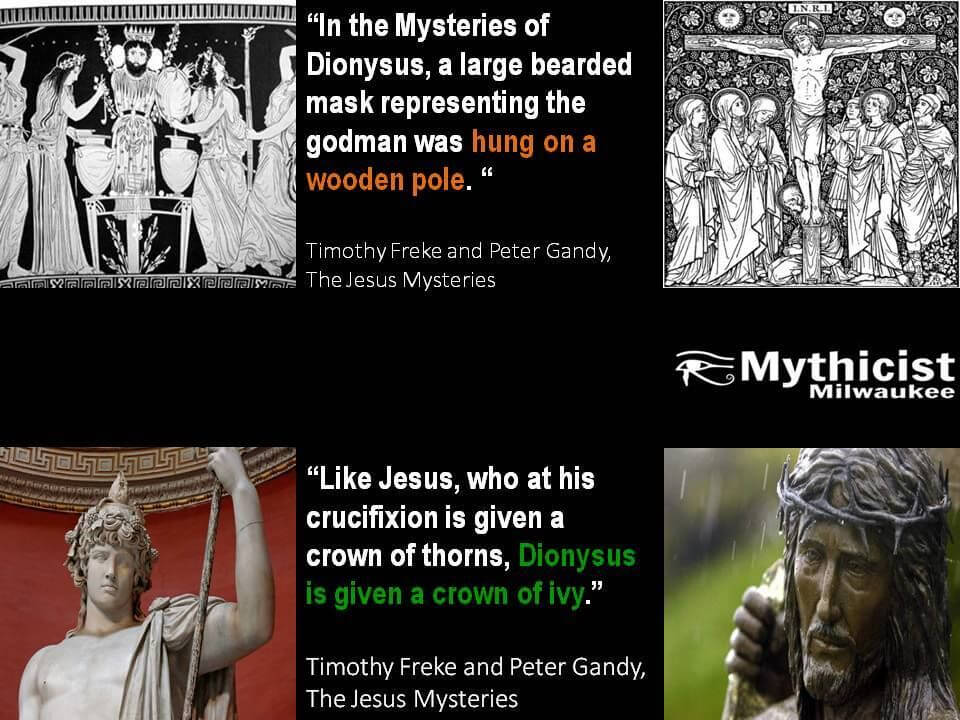 Fun FACT:  Christianity = A melting pot of Pagan myths stemming from all over zzzzz worrrld! 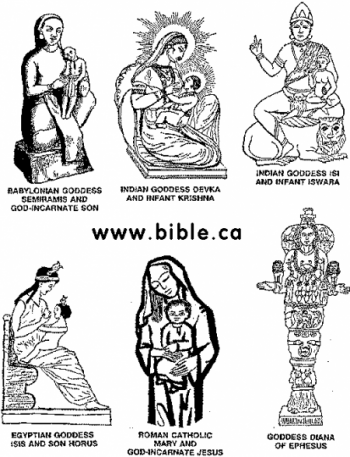 Christianity contains roots that originate from Hinduism, some from Egypt, and more Christian theology ancient world of theology!

A good slice of Greek mythology has influenced Christianity.

Obviously the stories aren’t for word, but a few specifics details do cross!

Jesus & Dionysus have the MOST intriguing parallels! (Not even Prometheus – The Greek Light Bringer).

Who Da Heck Is Dionysus?  One of The GREEK 12 Olympians Gods!

You can find tons of web images of Dionysus (And Hephaestus) riding the donkey. 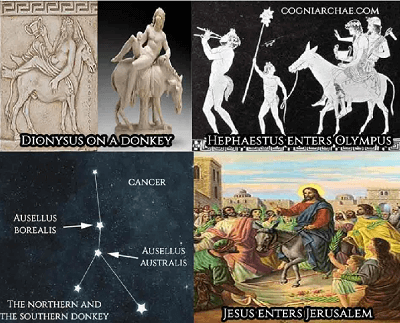 The Goddess Hera cursed Dionysus with never-ending insanity to roam the earth gathering while himself a MASSIVE fan-base following (Preaching and turning water into wine – Parallels to Jesus and his fan-base followers).

He made his journey to an Oracle At Dodona to get instruction (Almost reminds me of Neo going to the oracle in the Matrix film?)

He made his way to massive lake which was uncross-able and met 2 jack-asses.

Dionysus was made to travel to an oracle at Dodona to receive instructions as to the next step in his journey, but on his way there he came to a lake, so deep and wide that he was prevented from proceeding any further.

One of two asses (donkeys) he met there at the lake were willing to carry the god of wine across the water, and the grateful god placed both animals among the stars.

Part of the mythology includes another God named Hephaestus (Hephaistos), where they both rode on the donks to Olympia. (This is where we get the story of him going to the underworld to retrieve the dead).

For three days Hera sat fuming, still trapped in Hephaistos’s chair; she could not sleep, she could not stretch, she could not eat. Zeus pleaded with Hephaistos to dislodge Hera, but he steadfastly refused. Dionysus at last brought Hephaistos back to Olympus by getting him drunk and carrying him on a donkey. Then, on the condition Aphrodite would be given to Hephaistos as his wife, Hera was freed. 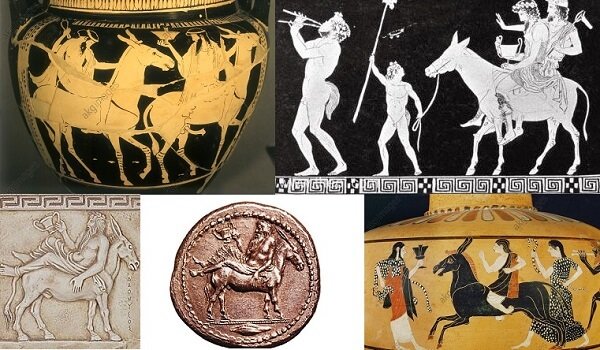 The next day the great crowd that had come for the festival heard that Jesus was on his way to Jerusalem. 13 They took palm branches and went out to meet him, shouting,“Hosanna![d]”“Blessed is he who comes in the name of the Lord!”[e]“Blessed is the king of Israel!”14Jesus found a young donkey and sat on it, as it is written:15 “Do not be afraid, Daughter Zion;see, your king is coming, seated ona donkey’s colt.”

This a hero’s tale of a triumphant return to their “Holy land”.  A BIG coincidence.

Dionysus is the master of wine-making or maybe wine turning. He’s known as the God of wine + fertility. 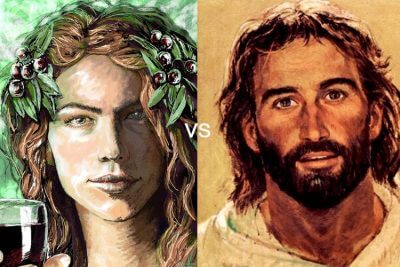 Dionysus is also the God of ritual madness, theater, and religious ecstasy. https://greekgodsandgoddesses.net/gods/dionysus/

Quote of Jesus riding the donkey from Johnny boy!

Dionysus Goes To The Underworld To Raise The Dead

Dionysus had to make one last journey before he’s allowed back into Olympia. 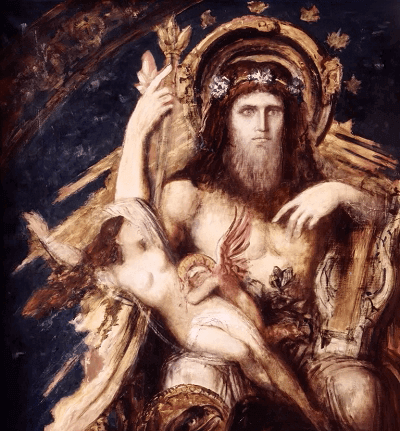 In Orphic Greek mythology, he descends to the underworld where he retrieves Hephaestus and his Mother Semele.

This is the case of him resurrecting the dead.

Thyone’s mortal name was Semele. She was a Theban princess loved by the god Zeus. When his wife Hera learned of their affair, she tricked the girl into having Zeus swear an oath to appear before her in his full glory. Bound by his pledge the god did so and Semele was consumed by the fire of his lightning-bolts. Zeus recovered their son Dionysos from her womb and upon reaching adulthood he fetchedher from the underworld to join the gods on Olympus.

I know, it’s not as magical as Jesus point and shoot to resurrect Lazarus to rise above the ground.

RELATED: 10 Quotes From The Kybalion

And here’s the quote of Jesus resurrecting Lazarus.

“Father, I thank you that you have heard me. 42 I knew that you always hear me, but I said this for the benefit of the people standing here, that they may believe that you sent me. 43 When he had said this, Jesus called in a loud voice, “Lazarus, come out!” 44 The dead man came out, his hands and feet wrapped with strips of linen, and a cloth around his face. – John 11:38-44

Both of them raised the dead right before entering back to their divine land.  Was it their final mission?  The tale of the triumphant return arggghhh!

Dionysus Wasn’t The Only Solar Deity With References To Jesus

Other Figures Related To Jesus

The Mythologies And Their Allegorical Meanings

Here’s a sample of astro-theology.  I won’t get crazy into this since there’s too much to get into when deciphering theology.

A lot of theological myths rehash from ancient pagan myths of the past.

I always think of it like a film reboot.

You think you’ve watched an original movie, then someone comes down along and says, “Dude, the original was better!” 2 thumps down!