Several ancient, prehistoric structures serve as iconic, standout monuments for their respective regions, like the ever-famous pyramids in Egypt. 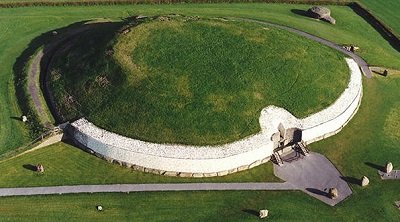 Ireland’s Newgrange Tomb falls into the same category: an ancient, miraculous structure that strikes anyone privileged to explore it with awe.

The site of Newgrange is located some miles North of Ireland’s capital, Dublin, and is identified as a world heritage site by UNESCO.

Experts believe the monument’s construction predates the Egyptian pyramids by almost six hundred years, dating to its construction somewhere in 3200 BC.

this huge Neolithic monument was built around 3200 BC. Central to a prehistoric complex, known in Irish as Brú na Bóinne (Palace of the Boyne), this passage tomb consists of 200,000 tons of material and has a footprint of over an acre.

A myriad of possible truths surrounds the Newgrange tomb’s history.

The structure itself is the epitome of quality architecture and engineering.

But establishing a conclusive story about its construction is not easy.

Many people believe that native Irish settlers made the structure back in the day.

Whereas, certain historians and explorers associate the monument’s features with elements of divinity.

Irishman Chris Campbell had ownership of the lands surrounding Newgrange in the 17th century.

Right at the cusp of the 18th century, Campbell and his fellows discovered the entrance to Newgrange in the year 1699. 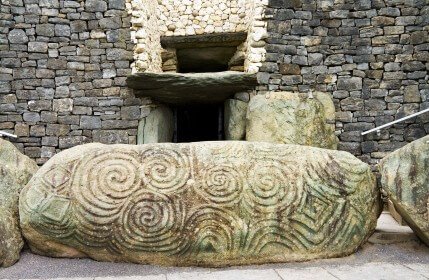 The men were simply looking to excavate some stones and proceeded to do so at the Newgrange site.

Upon the removal of some stones, particularly a large decorated one, an entrance was found leading into a passage.

Current statistical data suggest that the Newgrange tomb is seventy-six meters in breadth and towers at 12 meters in height.

The total area covered by the monument is roughly an acre.

The entrance found by Campbell and his men is a 19-meter-long passage leading into the heart of Newgrange tomb.

Following Campbell’s discovery, various explorers toured the structure and expressed their own points of view regarding its historic, cultural, and even religious significance.

The most important of these claims came from Charles Vallancey, who, in 1786, described the tomb to be an artificial cave of the sun.

According to him, this was symbolic of Chaldean Sun worshipping rituals. 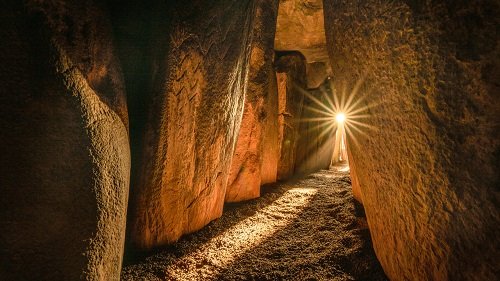 The religious aspect of the claim may or may not be true.

However, the aspect of a sun cave held significant truth, as every year on winter solstice day: December 21st, a particular chamber in the Newgrange tomb fills up with sunlight through a roof box.

Proper, directed excavation and exploration of the site was conducted much more recently by Michael O’Kelly from 1962 to 1975.

According to O’Kelly, Newgrange is a cathedral of megalithic religion.

The claim was based on certain features of the tomb that indicate a religious influence in its structure.

Charles Vallancey (1731-1812) in his 1786 survey described the tomb as an artificial ‘cave of the sun’, linked to Chaldean sun worship. He may have been wrong about the Chaldean part, but many years later the solar significance of the tomb was taken much further.

During the time frame Newgrange was constructed in, almost all structures were exclusively made of stone.

According to O’Kelly’s findings, the site has at least 97 kerb stones, each weighing a ton or more. 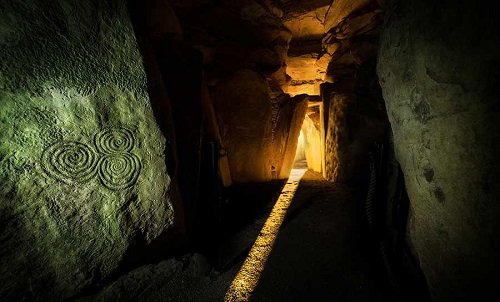 He further added that the Newgrange tomb, in total, is made of stone weighing over 200,000 tons: a massive number.

What makes this detail more mind-boggling is the manner in which these stones were obtained.

Stones were supposedly brought from:

● The Wicklow Mountains in the Wicklow County: 113.9 km south of Newgrange

● Slieve Croob Mountains in County Down, 107 km north of the site

The effort needed to transport these huge stones for the said distances, supposedly through the Irish Sea, must have been massive.

The factual details which cover the dimensions of Newgrange and tell the weight measurements for the materials used in its construction can be accepted as the truth.

We briefly touched upon this earlier that the Newgrange tomb is not a simple tomb as its name infers or as initial explorers believed. 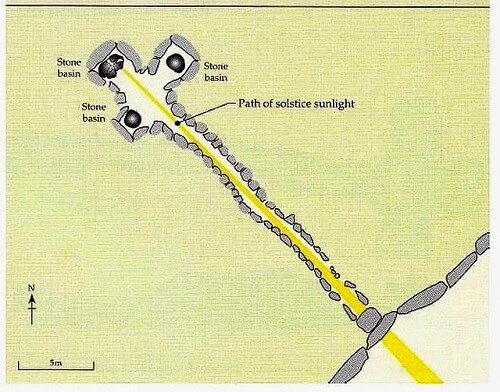 The existence of a roof box that allows sunlight to pour into a certain chamber within the structure only on the day of Winter Solstice is symbolic of Newgrange Tomb’s astronomical significance.

The Winter Solstice sunrise at Newgrange is an event famously known all over the world.

A large number of people gather at the monument each year to look at this miracle of nature and ancient engineering.

Every Winter Solstice day after dawn, roughly at 9 am, the sun starts to rise across the Boyne Valley.

About 4 and a half minutes later, light hits the Newgrange Monument and enters its main passageway.

Some minutes before sunrise on the 21st of December 1967, Professor O’Kelly stood alone in the darkness of the chamber at Newgrange, wondering what, if anything, would happen.

To his amazement, minute by minute, the chamber grew steadily lighter and a beam of sunlight began to enter the passage and to travel inwards, “lighting up everything as it came until the whole chamber – side recesses, floor and roof six metres above the floor – were all clearly illuminated”.

For the next 14 minutes, this beam of light stretches throughout the passageway and fills the central chamber in the Newgrange Tomb.

This whole event, a spectacle of nature to watch, depicts the precision and thoughtfulness that went into making the Newgrange Tomb.

The occurrence is nothing short of a major astronomical feat achieved by the creators of the Newgrange Tomb and depicts the quality and skills of the individuals who designed and made this place all those years ago.

Like most other ancient historic sites, the Newgrange Monuments have significant lore regarding some Gods who supposedly created the structure.

This take on the site’s creators inherently classifies it as mythical and legendary, but nonetheless, it is a significant part of Newgrange Tomb’s rich history. 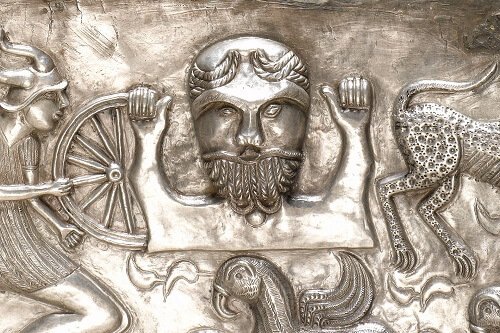 The “Tuatha De Danann” are ancient Irish Gods. Irish mythology is rich with their descriptions, and certain takes on Newgrange’s creators subscribe to the view that it was these Gods who created the monument.

The Tuatha De Danann are known to be children of the Goddess Dana.

It is understood that the structure was constructed as a tomb for their chief Dagda Mor, his son Oengus of Brugh, or the God Lugh of the long arm, father to a hero of Irish mythology: Cu Chulainn.

Legend also says that the site had magical powers and offered food and drink out of thin air, which never ended.

They were a race of God-like people gifted with supernatural powers, who invaded and ruled Ireland over four thousand years ago. According to an ancient document known as the Annals of the Four Masters (Annála na gCeithre Maístrí compiled by Franciscan monks between 1632-1636 from earlier texts)

Apart from the Newgrange tomb, the Tuatha De Danann also has a rich presence in tales of Irish legend and mythology.

The name of the tribe translates to the “Tribe of Danu” or Dana: their Goddess.

The identity of Dana being a Goddess remains arguable, as the name might simply refer to a leader or ruler.

According to legend, the Tuatha De Danann were Godly people with superhuman capabilities. 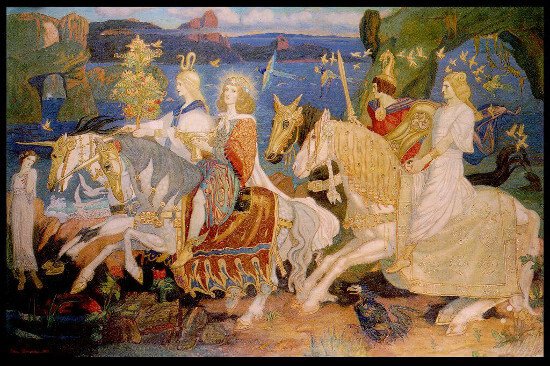 Documents compiled by Franciscan monks suggest that the Tuatha De Danann ruled over the region from 1897 BC to 1700 BC: a period of roughly 200 years.

Over this relatively short ruling phase compared to other famous rules, the Tuatha De Danann established themselves significantly.

Their origins are supposedly tied to the ancient, mythical cities of Murias, Gorias, Falias, and Finias.

A poetic narration from the Book of Invasions suggests that the Tuatha De Danann came to Ireland in flying ships that were surrounded by dark clouds.

It further adds that these clouds entirely covered the sun and brought darkness to the region for 3 days.

This narration certainly puts the Tuatha De Danann on a Godly pedestal, with majestic narrations of them descending from the sky.

Newgrange Tomb:  The Appearance of the Tuatha De Danann

All folks of legend and myths have certain physical depictions associated with them. 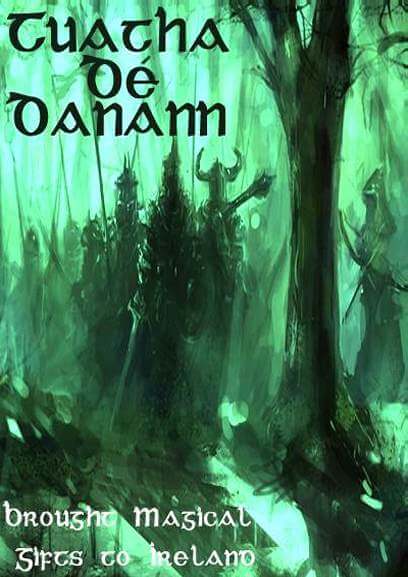 People native to Ireland in the time frame of Tuatha De Danann’s reign were known to be dark and short in height.

Whatever recollections that are found of the Tuatha De Danann suggest they were red- or blonde-haired people with blue or green eyes and pale skin.

In addition to that, they have a tall, sturdy physicality quite unlike that of native Irish people.

Some of these features strongly align with the ones found in certain ancient Egyptian mummies.

archaeology has unearthed evidence all around the world of small colonies of red-haired people from the same time period as the Tuatha De Danann’s arrival in Ireland.

This supports claims and theories which suggest that the Tuatha De Danann were ancient Egyptians and nothing more.

Newgrange Tomb: A Monument of Priceless Architecture and Ancient Legend

The history of the Newgrange tomb will never be fully uncovered, with explorers trying to figure out the reason for its existence and the identity of its creators to date.

Regardless, anyone who knows anything about the Newgrange Tomb can agree that the site pays tribute to top-tier ancient structures and has the richest legendary lore.