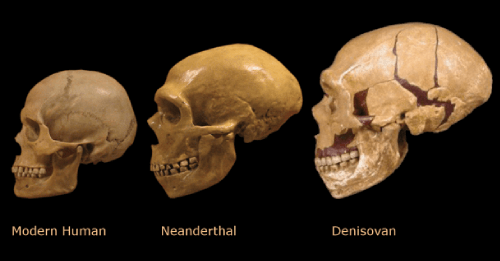 The Ancient Race Of Hominid Giants

Did a race of humanoid giants of roam our ancient Earth or was it just a case of gigantism?

Unfortunately, actual confirmations of genuine giants are difficult to get a first stage pass to.

Most stories and images on giants are circus hoaxes (Up to 90%).

But buried treasures of giants do dwell within Earth, how limited they may be.

A derivative work by Dr. Mike Baxter of a Neanderthal skull sits pretty next to a human modern day skull.

Specific names are usually assigned to some of the best Neanderthal findings.

Oddly this doesn’t come with a specific name tag.

Some fossilized findings are molded and sculpted for museum display because they’re too fragile, sold off to a buyer, or never heard from again.

One article states the giant skull is 1475 cm3, which is freaking massive compared to modern day humans.

Skull highlights its size, with an average capacity of 1,475 cm3, somewhat higher than the modern human skull, and is more elongated backwards (protrusion or occipital bun). Also it is observed easily a powerful supraorbital torus (bone above the eye sockets). Their pelvis was wider than ours and had shorter legs.

But I still got my money on a normal gigantic race gene.

Here’s another image of a different Neanderthal (Not the same museum). 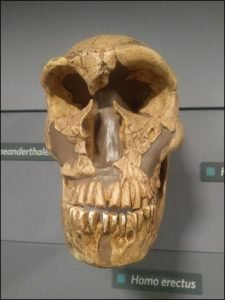 Homo neanderthal brain size was larger than the average modern human brain and averaged 1500 cubic centimetres and an average 3.3 lbs. This is to be expected, as Neanderthals were generally heavier and more muscular than modern humans. People that live in cold climates also tend to have larger brains than those living in warm climates.

Some people claim Neanderthals were shorter, as stated in the first quote above.

Fossilized Neanderthal footprints point to new evidence pertaining to a their height. 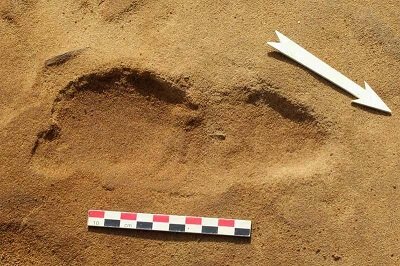 Le Rozel in northern France. They were made around 80,000 years ago and preserved in sandy mud. Most of the footprints were from children and may show that Neanderthals could have been taller than previously thought.

Some large footprints at the site indicate that they were made by an exceptionally tall individual. Evidence from skeletons shows that Neanderthals were smaller than modern humans, usually between 150 – 160 centimetres tall, but some of the Le Rozel footprints seem to have been made by someone with a height of 175 centimetres. This is the average height of a man in the USA today.

I personally think they’re being too modest in their findings.

The Denisovans are cousins/sister race of the Neanderthals.

In  2010, archeologists found a giant molar tooth of a Denisovan.

Researchers at Toronto could’ve wrap their head around the size of the molar tooth.

University of Toronto researcher Bence Viola, a co-author of the paper, was at the cave when a fragment of the first tooth was discovered.

“I thought, ‘Oh, that actually looks very human-like,'” he recalled in an interview with CBC News.

But when the rest of the tooth was found, he began to have doubts. “I thought, ‘This is too big. This doesn’t look human-like at all.'”

They thought it was WAY too massive to be a human tooth.  Weirdly that wasn’t the case.

A colleague who was an expert on Neanderthals thought it might belong to a cave bear. But DNA analysis showed the tooth actually belonged to a Denisovan.

“In its size, it’s comparable to hominins that lived two or three million years ago…but the age of it shows that it’s very recent,” said Viola, who analyzed the physical characteristics of the teeth.

The DNA analysis 0.17 was of the human genome, but theories conclude this was because of contamination and enzymatic degradation.

About 0.17% of random DNA sequences determined from this library aligned to the human genome, whereas the rest is likely to represent microbial contamination common in ancient bones. We therefore used a novel DNA capture approach to isolate mtDNA sequences from the sequencing library. A total of 15,094 sequences were identified which allowed the complete mtDNA genome to be assembled at an average coverage of 58-fold

The dimensions of the tooth is abnormally bigger than the modern day human.

Overall, the tooth is very large (mesiodistal diameter, 13.1 mm; buccolingual, 14.7 mm). As a third molar, it is outside the range of normal size variation of all fossil taxa of the genus Homo, with the exception of H. habilis and H. rudolfensis, and comparable to Australopithecines.

We got some in-depth morphological studies on Denisovans. 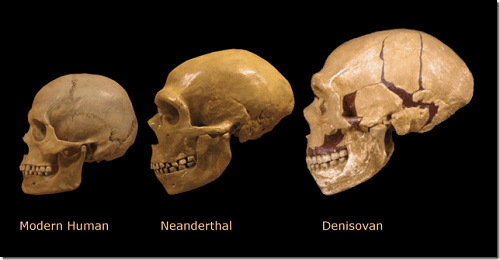 Here’s a conclusion from a case study on the morphology and anthropology of the Denisovans.

The analysis of the Denisovan upper molar morphology has conﬁrmed the equal validity of genetic and morphological criteria for differentiating hominin species, which has been a matter of hot debate in paleoanthropology. Moreover, this morphological analysis has enabled us to put forward a well-based hypothesis according to which the unidentiﬁed portion of  the Denisovan genome belongs to H. erectus s.l.Thus, our results emphasize the fact that classical dental studies still retain an independent value not lessened by the advent of molecular genetics methods.
Researchgate.net/publication/The-Morphology-of-Permanent-Molars-Paleolithic-Layers-of-Denisova-Cave 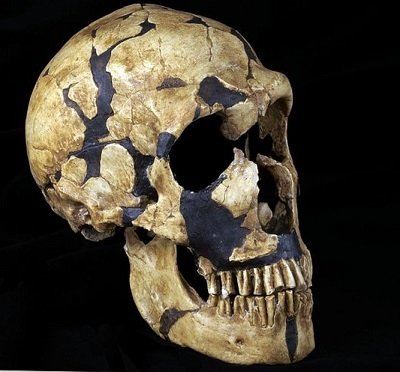 La Ferrassie 1 is most known for being the most complete Neanderthal skull; however, additional bones were also discovered.  This is especially important due to the lack of bones that show a large number of Neanderthal characteristics.

There is no mention of his height but the mainstream view is their height stood anywhere from  5’5 – 5’10.

BUT this is only going by their skull size!  So the estimates are completely 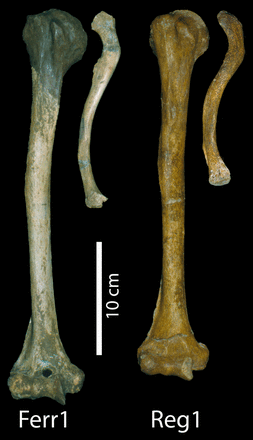 And if you look at the ladder of evolution things are getting smaller.

We had giant plants and animals due to high oxygen content and other factors effect the large life on Earth.

Giant primates existed such as the Gigantopithecus, not extinct.

As if the Boskop story were not already strange enough, the accumulation of other remains revealed another bizarre feature: Evolutionists promote that these people had small, childlike faces.  Physical anthropologists use the term pedomorphosis to describe the retention of juvenile features into adulthood. This phenomenon is sometimes used to explain rapid evolutionary changes when in fact they are rapid devolutionary changes.

It’s considered the largest cranial size ever found so far. 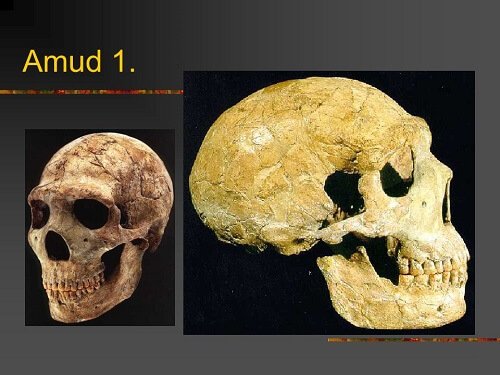 Amud 1 is a nearly complete but poorly preserved adult Southwest Asian Neanderthal skeleton thought to be  about 55,000 years old. It was discovered at Amud in Israel by Hisashi Suzuki in July 1961, who described it as male. With an estimated height of 1.78 m (5 ft 10 in), it is considerably taller than any other known Neanderthal, and its skull has by far the largest cranial capacity (1736-1740 cm3) of any archaic hominin skull ever found.

The national museum history one looks like the it’s 2000 cm3 which is comparable to the Boskop skull.

Nonetheless this thing is a beast.

Keep paedomorphosis in mind, it’s a rare condition, now couple that with another rare condition and you have hit an unlikely explanation. A syndrome lottery because not only do they ascribe Boskop of being hydrocephalus but also paedomorphic by bones from other individuals. It is unlikely either of the diagnosis’s are anything but shots in the dark.

Researchers originally thought Neanderthals weren’t as smart, but in fact the opposite is true.

The prefrontal cavity was BIGGER than modern man’s.

Now some sources like the above (Although I agree with some not all the things) say this refutes evolution.

I disagree with this because evolution is not a linear process among other misconceptions about evolution.

Barely 10,000 years ago (a mere blip in evolutionary time) human-like creatures called “Boskops” flourished in South Africa. They possessed extraordinary features: forebrains roughly 50% larger than ours, and estimated IQs to match–far surpassing our own. Many of these huge fossil skulls have been discovered over the last century, but most of us have never heard of this scientific marvel.

Prominent neuroscientists Gary Lynch and Richard Granger compare the contents of the Boskop brain and our own brains today, and arrive at startling conclusions about our intelligence and creativity.

Although, this research shows there’s no difference in the humerus. 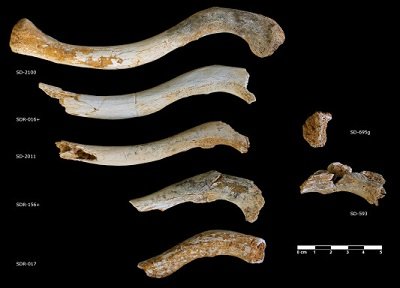 The maximum clavicle lengths of the Neandertals cluster at or beyond the largest dimensions in the recent human samples, the highest value of which is 178 mm (Fig. 2A). All of the Neandertal values, except that of the small Palomas 96 female (∼145 mm), are above the recent human sample means (SI Appendix, Tables S1 and S2). There is considerable overlap between the Neandertal and early modern human samples (P = 0.063), but they become significantly different if the exceptionally high value for the Upper Paleolithic Sunghir 1 (∼194 mm) is ignored (P = 0.039).

The relatively long clavicles of the Neandertals have been considered one of their hallmarks for more than a century, driven in part by the long claviclesof theLa Ferrassie 1 skeleton.

I always notice the opposite seems to be true vs what mainstream archaeologists theorize.

2 of the examples are the Neanderthal footprints and their cranial size.

If we combine the mythical + archeological + geological (Expanding Earth theory).

All 3 ingredients would make a perfect case for a race of ancient giants.

That will be a time for another campfire tale.