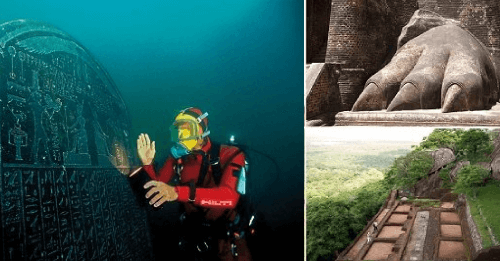 Myths That Turned Out To Be True

5 Myths That Turned Out To Be True

Do all myths have some truth to it?

Some mythical legends are born from a treasure chest of true historical tale.

Who can forgot the tale of the famous trojan Horse gift the Greeks foolishly accepted?

Troy was the city in which the famous battle between Spartans and the Greeks according to the legendary mythical tales of Homer’s Iliad.

Frank Calvert was the first to propose that Hisarlik was the ancient city of Troy.

Frank Calvert and his partner Heinrich Schliemann were the official founders of Troy.

But more recognition goes towards Schliemann for shady reasons.

Supposedly there was bad blood between them, and Schliemann tried to take all the credit without mentioning Calvert. 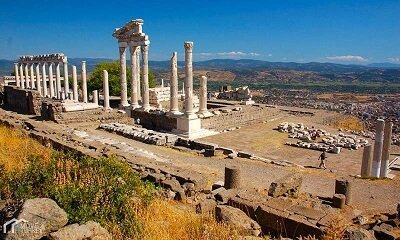 It wasn’t until 19th century Turkey when both of them went on a wild Indiana Jones quest in search of the lost city of Troy.

Frank Calvert owned the eastern half of the Hisarlik mound, site of the ancient city, and the Turkish government the western half. If, during his 1873-1890 excavations, Schliemann recovered artifacts on Calvert’s land, Calvert’s heirs might have a basis for claiming a share. The Calvert heirs also say that since Frank Calvert was not privy to all the finds and their locations, and since Schliemann’s documentation was at times suspect, they have a claim to other treasures (as yet unspecified) that they believe were not divided equally with Calvert.


What Did They Find?  Prima’s Treasures Of Schliemann Scheming

The 2 lads found weapons such as spears, daggers and tools of trade such as saws, chisels etc. 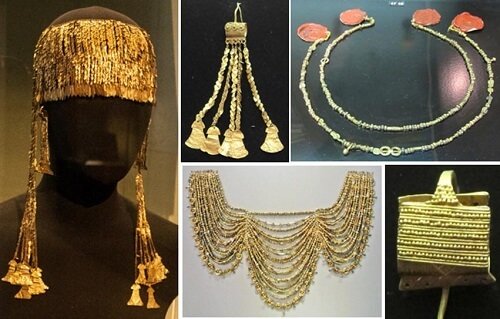 They’ve also found some saws, gold beads and other artifacts that gave revealed a tale that was more than just a myth.

Supposedly Schliemann had smuggled back to Athens from Turkey.

Priam’s treasure created a huge scandal when it was discovered that Schliemann had smuggled the objects out of Turkey to Athens, breaking Turkish law and expressly against his permit to excavate. Schliemann was sued by the Ottoman government, a suit which was settled by Schliemann paying 50,000 French Francs (about 2000 English pounds at the time). The objects ended up in Germany during World War II, where they were claimed by the Nazis. At the end of World War II, Russian allies removed the treasure and took it to Moscow, where it was revealed in 1994.

Lost City of Heracleion Aka Thonis

Another city associated with legends that echoes tale of the mythical past.

Herodotus, Homer, Strabo and Diodorus were the first to speak of the city of Heracleion. 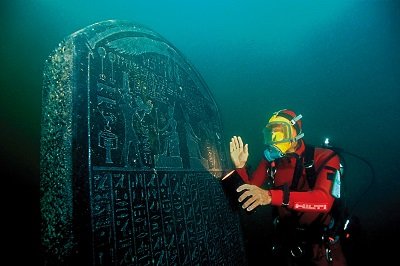 Herodotus tells tales of a temple in Egypt to which Helen of Troy once visited, before the Trojan War.

Theseus ‘was carrying Ariadne off from Crete to the soil of sacred Athens, but he did not have his joy of her; for, ere that, Artemis slew her in sea-girt Dia, on the information of Dionysus.’ The Dia mentioned here is the little island, now Standia, just off Heracleion, on the north coast of Crete. Theseus would pass the island in sailing for Athens.

The Mediterranean Sea swallowed up this legendary city on the north coast of Egypt about 1,200 years ago. 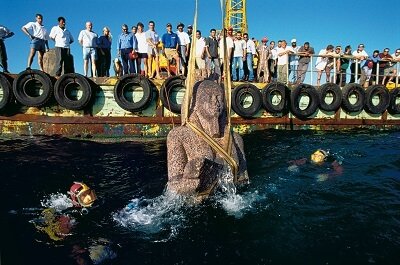 People thought this city was a mere fairy tale throughout the ages until that myth became a reality.

The Hunter Of Lost Cities Franck Goddio Hits The Jackpot

In the year 2000, Franck and his team went on the hunt and discovered the city from historical accounts.

The team used magnetic map to pinpoint the location.

Now submerged under the waters of the Mediterranean Sea, in its heyday Heracleion was located at the mouth of the River Nile, 32 km (20 miles) to the northeast of Alexandria in ancient Egypt . The enormous city was an important port for trade with Greece, as well as a religious center where sailors would dedicate gifts to the gods. The city was also politically significant, with pharaohs needing to visit the temple of Amun to become universal sovereign.

Helike – The City Of The Sea God Poseidon

An ancient Greek city that’s been also a victim of the sea’s monstrous power.

In the year 373 B.C. was the year of the city’s destruction. 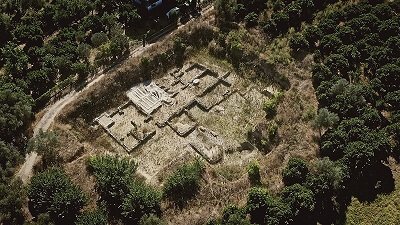 A tale mentioned by Homer and also Herodotus.

The God of the sea was angry with the inhabitants of Helike because they wouldn’t model a statue after him.

In 1998, the Greek archaeologist Dora Katsonopoulou was the first to suggest that Helike might refer to an inland lagoon.

Then he struck Hippodamas in the midriff as he was springing down from his chariot in front of him, and trying to escape. He breathed his last, bellowing like a bull bellows when young men are dragging him to offer him in sacrifice to the King of Helike, and the heart of the earth-shaker is glad; even so did he bellow as he lay dying.

In 2001 a team found the city which was covered in sedimentary layers. 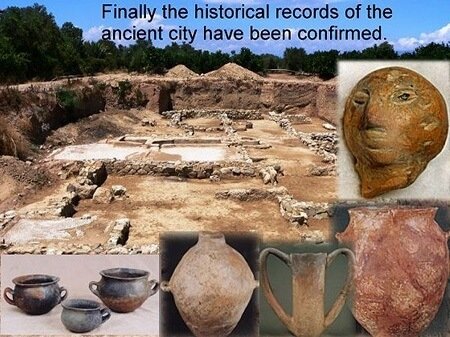 In 2012 the team digged up the city to confirm it was the city Helike.

The excavations are still taking place today in the once thought to be mythical city.

The past reveals bit by bit as they dig further into the sedimentary layers.

Sediment under which these remains were buried was of the exact type one would find in a dried up lagoon. Further excavation revealed an earthquake destruction layer that included substantial amounts of pottery, cobblestones and roof tiles. Lastly, the site was roughly consistent, taking into account variations in the coastline over time, with the distance from the city to the Gulf shoreline as reported by ancient philosopher Herakleides of Pontos.

An ancient fortress that’s thought to be occupied as long as 5,000+ years ago, but shaped into its glory by the 5th Century.

This legendary location sits high above on the top of a mountain. 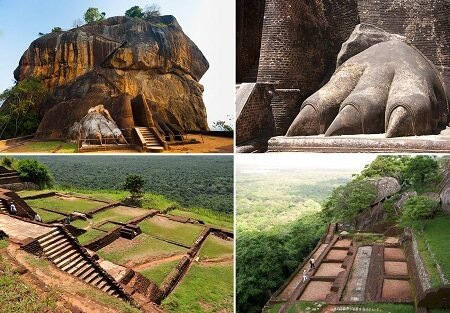 The local legends claim the Gods built this monument rock which descended from the sky.

According to local legend, the rock citadel was created by the gods who descended from the sky and was modelled based on the mythical abode of “Kuvera” the god of wealth, and called the “Palace in the sky”. The murals depicting pretty damsels with flowers in hand are held by some to be goddesses, however local archaeologists believe they were the courtesans of King Kashyapa.

The Mahavamsa is a book of historical chronicles filled containing a poetic style of writing.

One of the series of the mythical tales is the chronicles of the kings. 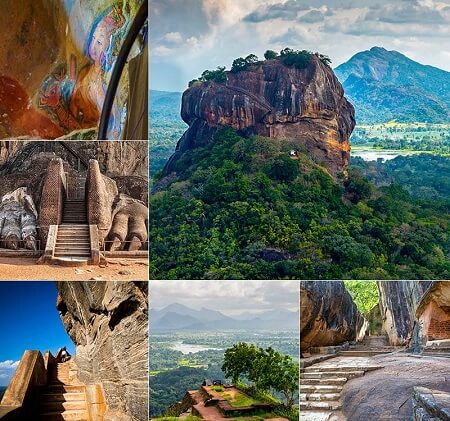 What amazes me is the iron paw and the stairway which leads to the lion’s mouth.

It almost reminds me of a sphinx paw.

True enough, Moggallana came to do battle with the King. During a battle that King Kasyapa did not have much hope of winning, Kasyapa took his own life by cutting his throat. His brother Moggallana obviously became king and reinstated Anuradhapura as the capital. He left Sigiriya to the monks, and of course its eventual abandonment. It was not until the early 1800s that colonial archaeologists found the site, and there are still large parts of the ancient city that have not been excavated.

Another myth from the gods thought to as a mere figment of human imagination.

Legend says the Hindu Krishna left for the spiritual realm while his city Dwarka submerged under the sea. 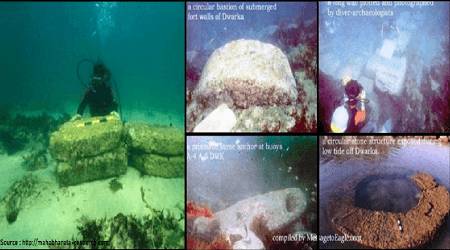 The timeline of this occurrence happened in the Kali Yuga age which started about 5,000 years ago.

There’re tales of him visiting the city mentioned in the ancient 2,000-year-old Mahabharata.

In the Mahabharata, Dwarka is described as a utopian city with opulent architecture. The legend goes that Krishna summoned divine powers to build the magnificent city, which rose from the sea, complete with a massive stone wall to protect it. In the wake of Krishna’s death, the legendary kingdom sank into the Arabian Sea and its glory faded into myth.

Unfortunately, we don’t get many images of this city.

There are a few pictures circulating the internet but they’re deemed fake as far as I know. 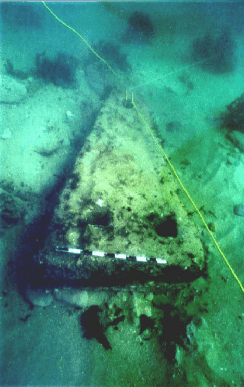 This is the only credible known image we have.

You’d think they’d provide us with 100’s of pictures of such a mind-blowing discovery.

The successive underwater investigations off Dwarka in about 4 to 12 m water depth have revealed the presence of many submerged stone building blocks such as remains of the wall, pillar, and bastion, and also stone anchors of various types like three-holed, prismatic and triangular were noticed in various places.

SDDE and SCUBA systems were used for underwater exploration along with ‘Aquazepp’ the underwater scooter. The survey boats were chartered and were equipped with an underwater camera, underwater TV system, and airlift equipment for exploration and excavation.