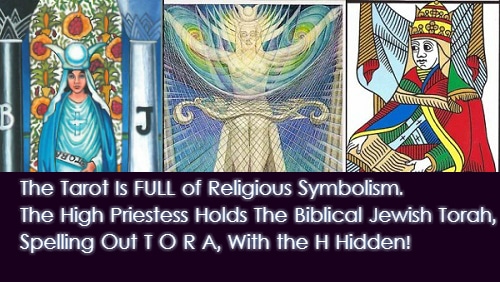 After years of hardcore research along with some practice, I’ve discovered the tarot is more than a mere card game of silly mundane fortunes.

The tarot references mystical elements fueled with spiritual applications.  This is especially true for the Rider-Waite tarot(And other tarot decks).  Do you realize the electrifying symbolism of the tarot cards? 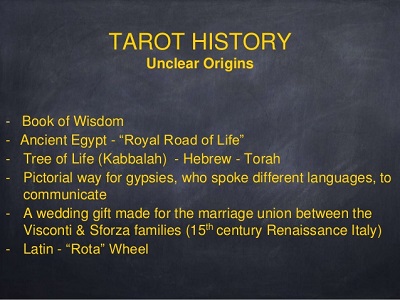 Glue your eyes at the High Priestess tarot card.

Do you notice the letters engraved in the 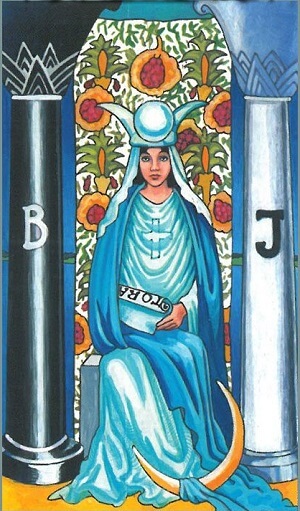 scroll concealed partly on her lap?

The scroll reveals the letters “T O R A“.

Her dress conceals one letter to complete the puzzle.  The letter “H”!

My logic says “no coincidence”.  What do you think?

It’s a crystal-clear reference at the biblical Torah.

How else do I know this?  Waite himself makes this very statement!

How about the fact ancient civilizations like Egypt and Sumeria contain tarot pictoglyphs?

Do you know where Waite got his ideas from?

Do you notice the similarities between these 2 images of the world tarot #22 major arcanum card?  Look at the cylinder seal with the bull.  The Rider-Waite tarot ripped off elements from this ancient seal. 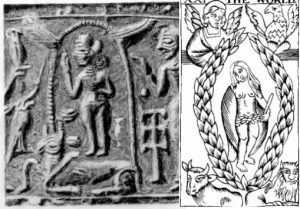 Some glyphs can draw back to caveman times.

Other old-school civilizations like India or china had their own version of tarot.

You think that’s where it stops?

No freakin’ way.  It’s even in mainstream hollywood!

In Greek mythology, Morpheus is the dream God.

The God who awakens others still sleeping in the dream(matrix)….

The 2nd tarot card (The magician has number 1 given to it) the “The Magician” positioning his hands in the same manner as Morpheus. 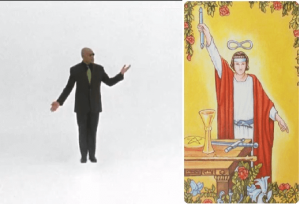 Maybe I’m over-analyzing and he happens to mimic the magician tarot.  Maybe not as obvious in The Matrix.  But the next film is TOO obvious!

Look at both cards…Do you see the obvious plot?  A movie named “9”.

What if they called the movie “18”?  Then we can say it could be mere coincidence.  But that’s not the case here is it?

Knight of Cups is a drama filled film starring Christian Bale who plays a screenwriter.

Can the title be any more obvious? “The Knight Of Cups” 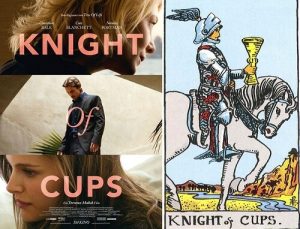 The movie has NOTHING to do with tarot cards in a literal sense.  But everything related to tarot card symbolism.

The main character is a depressed screenwriter, representing the knight of cups itself.

Cups is the element of water which symbolizes our emotions.  Cups also refers to natural artistic elements as we see here in the film.

It makes sense that the main character is a screenwriter.

The dealer shuffles at the poker table unaware of the decks origin.

The Minor Arcana (lesser secrets) is where the 52 card playing deck originated from.  The minor consist of 56 cards with 4 court cards for each suit.  Kings, Queens, Knights, Pages.

The minors reveal more day to day mundane events of your life.

The joker card contains the numerical value of zero.   We don’t see frequent jokers in card games unless its presented as a “wild” card. 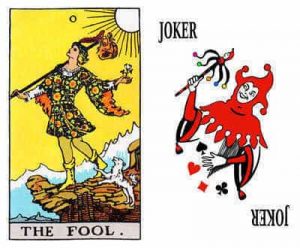 The joker card is the fools equivalent.  Isn’t odd some card games exclude the joker card?

Remember, “The Fool” isn’t a minor arcanum tarot card member, but from the greater 22 major arcanum.

#5 secret: Tarot Has Its Root Origin From Subconscious Dreams

Dreams are the tarot imagery we experience every night.  Dreams drench in symbolism, just like the tarot cards.

Dreams speak through symbolism which relate to our waking life.

Most psychic visions occur in dream. 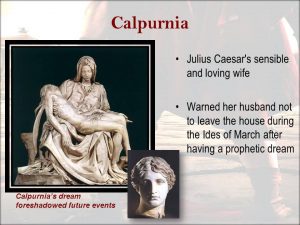 She dreamt of a Caesar statue gashed in blood.  A few weeks later Brutus murdered him falling in betrayal.

This is ONLY one form of how dreams give future visions.

Did you know certain dreams are advice from your subconscious?  The subconscious nature is 100% psychic!

For example, let’s take the shy stay at home quiet type vs the wild speed demon party goer.  Both men dream about riding a horse swiftly along a puddle-filled path.

The same dream can give different messages!

This is just the tip of the iceberg.

The tarot ties in with numerology, astrology, geometry as well. 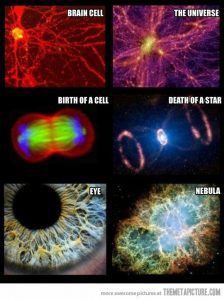 “Mind no longer appears to be an accidental intruder into the realm of matter, we ought rather hail it as the creator and governor of the realm of matter. Get over it, and accept the inarguable conclusion. The universe is immaterial-mental and spiritual.”

Think of it as a future Life GPS road map.

The 2nd hermetic law “As above So Below” is an ancient proverb known by our ancient ancestors who were powerful mystics. 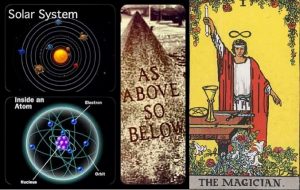 Remember, thee magician is the 2nd tarot card as the numerical value of 1.

The Fool takes the numerical value of 0.

The one hand up and one hand down symbolizes the 2nd hermetic law of reality!

#7. Tarot Cards Are Spiritual Therapy Which Alter Your Being 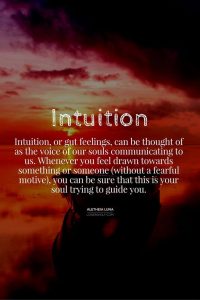 The tarot IS a temporary therapeutic tool for spiritual ascension.

People go to mental therapy to work out psychological problems.

You reach a stage of understanding your own psychological kinks.

YOU become your own spiritual therapist.  You gain new insights from tarot spreads you perform on yourself.

“Archetypal images, as universal patterns or motifs come from the collective unconscious, are the basic content of religions, mythologies, legends and fairy tales. ” 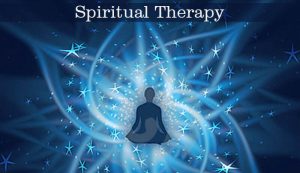 people are usually enslaved by their stars.  .  The tarot helps you RULE your stars.