The belief in paranormal psychics was serious enough for the U.S. C.I.A.(Central Intelligence Agency) to fund the “Stargate Project“. 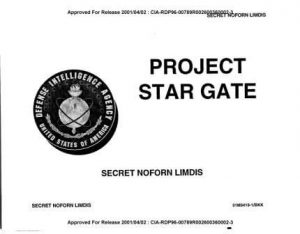 What purpose did the Stargate project research serve the government?

The D.I.A.(Defense Intelligence Agency) is a branch of the C.I.A tree.

The name says it all “Defense”(most don’t know this information is public knowledge).

Not the first time the C.I.A funded psychic paranormal experiments.

You can be 100’s miles away from someone and SPY on their current whereabouts.

Do you see the benefits from this ability?

A psychic ability which locates enemies world-wide! What would you do if you had that power?

If psychics are real, The Russian psychic Nina Kulagina takes the cake. She’s known to be the real deal. 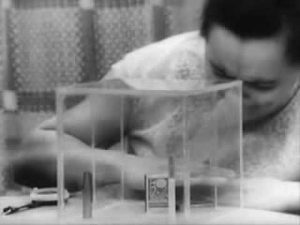 Word spread like wild-fire and scientists globally traveled to witness her psychic powers.

Mind you, every test is under a controlled environment meaning NO room for hoax/tricks.

The first of scientists performing tests on her was Soviet biologist Edward Naumov. Like most scientists, Dr. Naumov was skeptical at first.

Guess what he witnessed next which sent electric chills down his spine….

Nina hovered her palms over match sticks which instantly rolled off the table one by one! 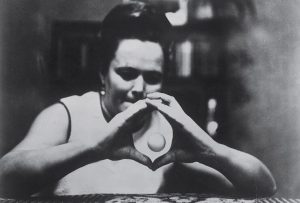 William McGary worked for the U.S. investigating organization of psychic phenomena in 1970.

He packed his bags and traveled to Russia to see first-hand if the hype is true.

Objects including a wedding ring, placed on top of a condiment bottle moving across the table.

Tricks such as drats, wires, magnets.

And still managed to pull off her “fake psychic tricks” in a controlled environment!

She’s a gold medal runner-up in relation to psychic proof!

Dream telepathy is one of history’s best hard-steel proof of psychic phenomena.

Dreams are forms of altered states of consciousness. 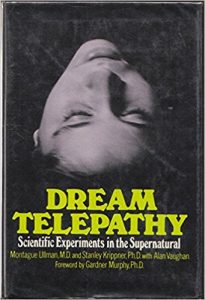 The experiment was simple:

A dream sender draws an image and conceals the image in an envelope..

The dream receivers sleep in separate rooms which contain the concealed envelopes.

The next morning scientists ask the dream receiver which vivid dreams he remembers.

“The early exploratory work with Laura Dale, followed by the efforts of Karlis Osis, Douglas Dean and myself to use the REM monitoring technique as a way of capturing a good yield of the night’s dreaming, thus facilitating an investigation into dream telepathy, played an important role in my decision to give up private practice in favor of a full time position in a hospital and the opportunity to shape a research program devoted solely to the pursuit of that elusive quarry, the paranormal dream.”

The next experiment below takes psychic abilities to whole other level! 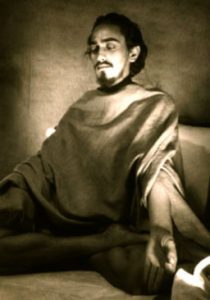 Swami Rama stopped his heart pumping blood for up to 16 seconds. He also produced 11 degrees differential on his palm.

The average person generates beta brain waves while consciously awake. He emits theta brain-waves on a unconscious level while in DEEP meditation!

One experiment includes needles, exhibits his telekinetic psychic abilities. A controlled laboratory environment was set up . He moved the needles without touching a finger 15 feet away! 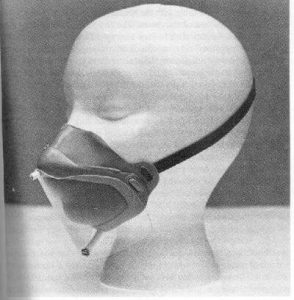 The scientists took ALL precautions. They mummy wrapped him in thick cloth, preventing him from shaking the needles.

They strapped a nose/mouth guard on his face, preventing any breathing on the needles.

With every precaution taken, you know what happened next?

You guessed it. The needles freakin’ MOVED!

He states his intentions on why he agreed to go under scientific lab-rat testing.

“I am doing this not to show that I am a magician or a superhuman being, but to show that controlling the mind one can control one’s bodily functions, including the so-called involuntary muscles of the heart and lungs. This is done through control of the autonomic nervous system, which is involved in the development of most psychosomatic diseases” – Swami Rama

What’s up with all 3 experiments? Are these people the only ones capable of psychic powers?

How Do Psychics Work? Kept Secrets From The Public Mass View.

Secret Knowledge #1: Subconscious Dreams Are Crucial On How Psychics Work

Dreams are psychic in nature. Millions of stories over famous people predicting their own or others death. For now let’s discuss on how dreams are real psychic gateways.

Our mind is consciousness itself which splits in 2 sides(2 sides of the same coin). 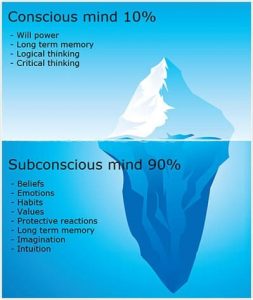 Our subconscious gives birth to all our dreams. A realm we have minimal control over.

He claims every mythical stories and fabled creatures are psychic dream visions. Symbolic in nature. The beauty and beast story are human archetypal symbolic patterns rising from dreams.

“Myths go back to the primitive storyteller and his dreams, to men moved by the stirring of their fantasies. These people were not very different from those whom later generations called poets or philosophers. ” – Carl Jung

“Conscious use of symbols is only one aspect of a psychological fact of great importance : Man also produces symbols unconsciously and spontaneously, in the form of dreams.” – Carl Jung

Lots of famous stories of people envisioning their or someone’s death.

Again dreams are a HUGE part of how psychics work. What does that mean? 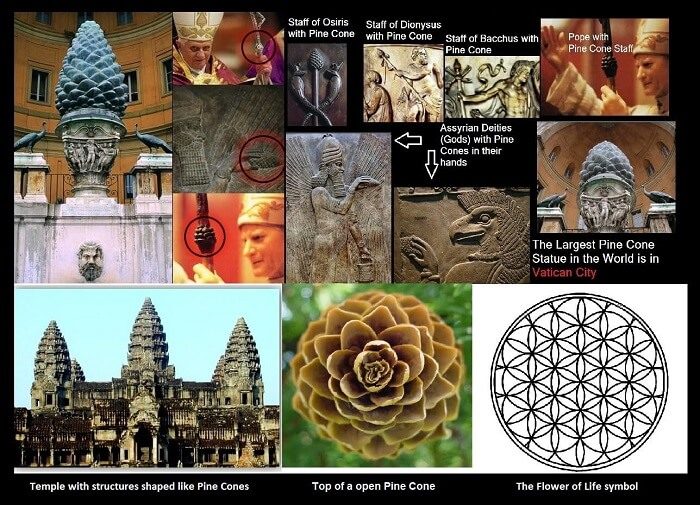 Your brain contains a brain structure located in the center. The Pineal gland which houses ALL psychic activity!

This is part of how psychics work through physiology . Ancient sages, mystics/philosophers knew the potency of the pineal’s psychic energy!

“In every man, there is an Eye of the soul which….is far more precious than ten thousand bodily eyes, for by it alone is the truth seen….The Eye of the soul….is alone naturally adapted to be resuscitated and excited by mathematical disciplines.” Plato, Republic

The Catholic Pope holds a “pine-cone” engraved staff! A coincidence?

A Buddha statue with a “pine cone” head. 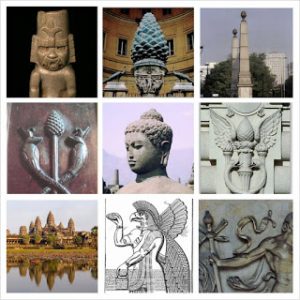 How MUCH proof do you need? Any skeptical challenges this? Smack them with this mind-blogging info!

Here’s a list school of ancient cultures with symbolic representations of the pineal gland.

What Are The 7 Hermetic Laws Creating Our Reality? 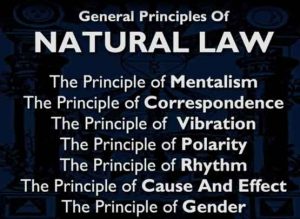 1. Principle of Mentalism: Our consciousness effects reality, thus IS reality. Everything stems from a universal mind! A scientific FACT(meme)! Matter and energy are interchangeable forms from the root of a universal mind we ALL share. We have mini minds.

2. Principle of Correspondence: Massive or tiny physical objects, doesn’t matter. Everything connects on a micro/macro level. From molecular, cellular and atomic. Nature unveils her secrets, we just need to open our eyes(meme). From the smallest particle to the biggest planet, all must bow to the same system.

3. Principle Of Vibration: Nothing rests. All atoms move in constant motion. The atoms of a chair or your body never rest. Science again rediscovers an ancient principle known long ago. Matter and energy are 2 sides of the SAME coin in different vibrational state. 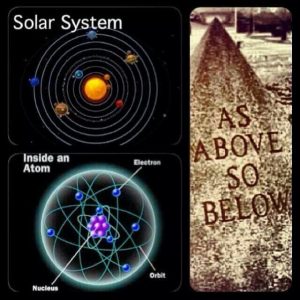 4. The Principle of Polarity: Everything is dual in nature. Temperature contains dual opposites, hot and cold. A battery works with positive and negative end. An atom has a positive proton and a negative electron with the neutron. We can conclude that no opposites = no reality. You NEED contrast for existence.

5. The Principle Of Rhythm: The movement of changes between the 2 polarities. Everything rises and falls. A cycle of energies. From summer to winter or day to light. Nature reveals her secrets again!

6. The Law of Cause and Effect: Every cause has its effect, and effect has its cause. Mere “chance” doesn’t exist. Roll a dice on the table and the untrained eye sees “chance”. Take a closer look! Each roll depends on muscle force, table conditions, di’s hand-held position, position of hand.

7. Law of Gender: The law of generation. The principle of gender works as generation, regeneration, and creation. Either masculine or feminine. This is the law of polarity manifested through sexual expressions. Remember the atom? The proton is positive electrical charge (masculine). And the electron is a negative magnetic charge (feminine). Remember You can’t have reality without contrast(creation)? Logical to conclude gender polarity’s creates objective reality.

How do psychics work with the hermetic principles? Yoga, Meditation, Rituals, all building focus and concentration through meditative means.

Many years of pile-stacked paranormal stories impossible to debunk!

Remember, dreams give psychological insights to see in ones own or others future. 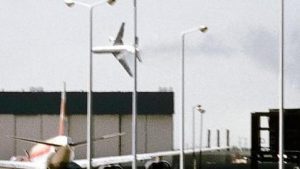 David Both kept experiencing a reoccurring dream 10 nights back to back! He dreamed a jetliner flying off a runway.

The officials listened to his dream description. From this information, they gathered he was describing a DC-10 plane or a Boeing 727.

The 10th and final day in a row finally came. Guess what happened next? The DC Flight 191 American Airline jetliner’s engine faulted. 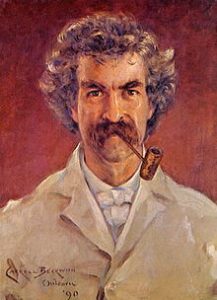 The famous writer Mark Twain isn’t known for psychic predictions. But eerily , he’s had a few premonitions, including his own death…..

Mark’s Dreams About His Brothers Wake

Mark dreams his brother is lying in a coffin with his sister gazing standing between 2 chairs.

Guess what happened only a FEW weeks later? His brother passed away from a boating accident.

The same funeral scenario acted out at Mark’s sister parlor.

Mark Predicts His Own Death

Did you know Mark Twain was born the night of Halley’s comet!

Just a few years before his death, he states he’ll die on the night of Halley’s comet.

And fate would have it, his premonition came true.

What’s scary is he was born and died during Halley’s comet return!

Abraham Lincoln had a couple of dream premonitions of his death and his body guard knew.

Lincoln had a series of premonitions which one of his body guards was aware of.

Lincoln’s dream starts in a room filled with people gathering around a dead body. 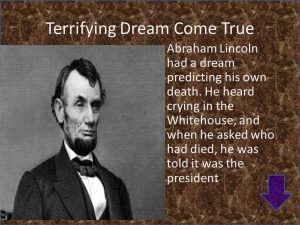 Lincoln asks one soldier accompanying the funeral “Who was the corpse?”
The Soldier states someone assassinated the president.
“About ten days ago, I retired very late. I had been up waiting for important dispatches from the front. I could not have been long in bed when I fell into a slumber, for I was weary.

I soon began to dream. There seemed to be a death-like stillness about me.Then I heard subdued sobs, as if a number of people were weeping.

I thought I left my bed and wandered downstairs. There the silence was broken by the same pitiful sobbing, but the mourners were invisible. I went from room to room; no living person was in sight, but the same mournful sounds of distress met me as I passed along.

I saw light in all the rooms; every object was familiar to me; but where were all the people who were grieving as if their hearts would break? I was puzzled and alarmed.

‘Who is dead in the White House?’ I demanded of one of the soldiers, ‘The President,’ was his answer; ‘he was killed by an assassin.’

Then came a loud burst of grief from the crowd, which woke me from my dream. I slept no more that night; and although it was only a dream, I have been strangely annoyed by it ever since.”

Oscar Pistorious shot his girlfriend Reeva Steenkamp on Valentine’s day 2013, thinking she was an intruder. The murder trial is still on going since 2014. 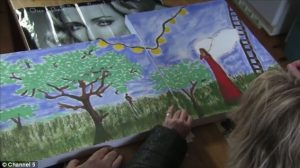 Reeva’s mother told newscasters she was 14 when she had a premonition of her death.

She later painted her premonition in a symbolic form.

The painting portrayed an angel standing at the bottom ladder leading to a heavenly sky.

Far off in the distance is a man pointing a gun in her direction.
Reeva’s mother is super convinced her premonitions are real. 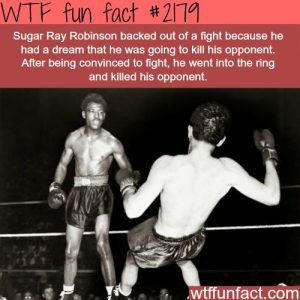 Sugar Ray made comments regarding a dream he had which ends up fatal for his opponent. This is just a few nights before the match!

The fight still happened. In the 8th round, Robinson gave Doyle a massive left hook to his head, instantly knocked out cold.

The injury turned out to be fatal than expected. Doyle ended up rushed to the hospital and never regained consciousness.