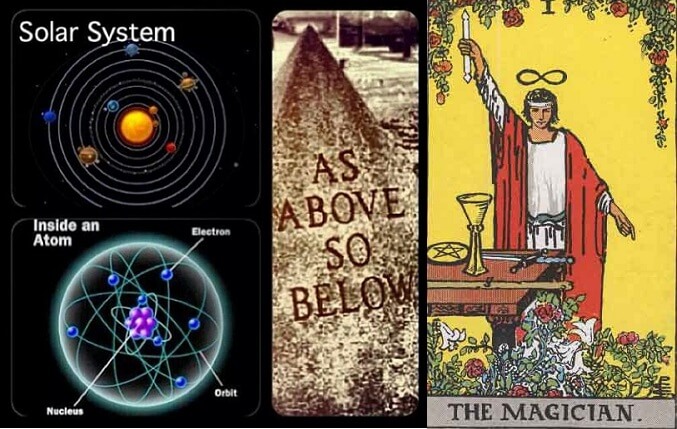 5 Forbidden Ancient Knowledge Not Taught By The Mainstream

Do you remember when your high-school history teacher shed light on brilliant figures like Nikola Tesla?  Because I don’t!

Granted, I’d fall asleep in class, but even straight A-students never heard whispers of his name.

The gates of mainstream edumakcation seals off a huge slice of our history. 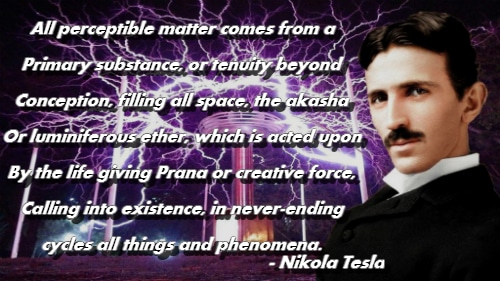 Or how about Plato’s’ dialogues?

I’m talking piles of information shackled underneath the public’s noses.

Why doesn’t mainstream education dwell into the MYTHS? 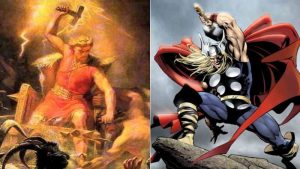 You remember the stories of Mount Olympus of Greek mythology?  Or Asgard?

Those fable stories take their root during the Viking era of Norse mythology.

Some myths originate from Atlantean history(Or even older).

“Both the sinking of Atlantis and the Biblical story of the “fall of man” signify spiritual involution–a prerequisite to conscious evolution. ”  The Secret Teaching Of All Ages.

Atlantis had to lie somewhere in the “Atlantic” ocean.  Do you think the name Atlantic is by mere coincidence?

The name “Atlantic” has an obvious reference to Atlantis that even a blind-folded bat sees. 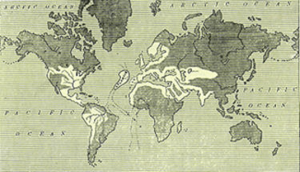 Author M. Pierre Termier dedicated his life to Atlantis.  A member of Sciences and Director of Service of the Geologic Chart of France in 1912.

He believes Atlantis stretched from Iceland to South Africa.

He says Atlantis sank because of dredging (Lava seeping through the cracks of the ocean floor , 3,000 meters below).

Many parallels exist between Egyptians and Greek mythology. 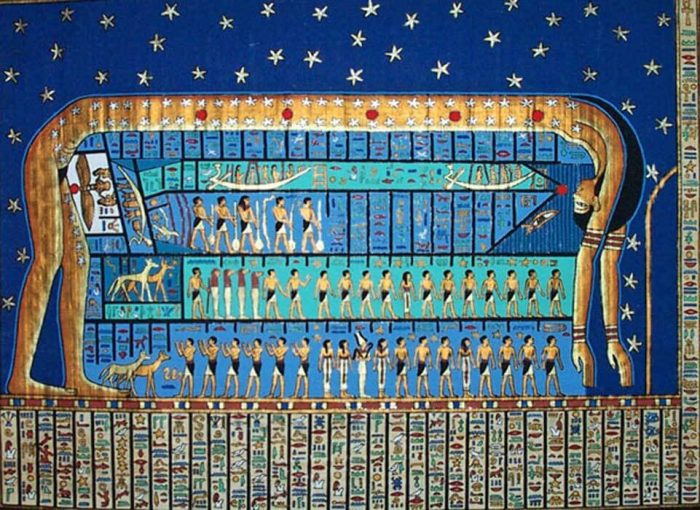 Tales of the Egyptian Isis, or Greek Persephone symbolize astral energy descending in the realm of physical matter.

They also represent the universe and all its dimensions (including the metaphysical realms) aka astro-theology.

As you see, there are multi-symbolic meanings.

The ancients base religious myths on the stars, cosmological events, and spiritual allegories all at once.

Tammuz (also known as Dumuzi) was the name of an ancient Near Eastern deity who was best known for his patronage of herdsmen and his romantic entanglement with Inanna (the Sumerian goddess of sexual love) also known as Astarte or Ishtar.

As a fertility god, he represented the insemination of the mother goddess, – New World Encyclopedia

The name Ishtar is likely Semitic in origin, and was identified in ancient times with Canaanite goddess Ashtoreth or Astarte (Biblical Hebrew עשתרת).

It is possible that the underlying stem is the same as that of Assur, meaning the “leading one” or “chief.” The older Sumerian name, Inanna, means “Great Lady of An”—An (or Anu) being the god of the sky or heaven. – New World Encyclopedia

The insemination of Tammuz represents the splitting of unity and becoming of a reality of duality.

She descends from the planet Venus.  The Ram, lion, dove, and cow are sacred symbols to Ishtar. 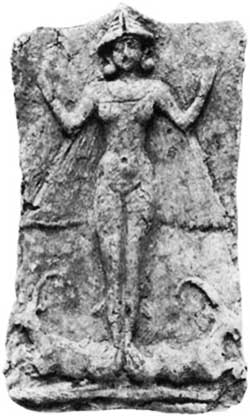 Is that where the Hindus got their celestial cow story from Aka the Zodiac?

The zodiac was in use by the Roman era, based on concepts inherited by Hellenistic astronomy from Babylonian astronomy of the Chaldean period (mid-1st millennium BC), which, in turn, derived from an earlier system of lists of stars along the ecliptic.[5] The construction of the zodiac is described in Ptolemy’s vast 2nd century AD work, the Almagest.[6] – Wikipedia.org/wiki/Zodiac

Maybe this is where we get the stories of Hindu cow worship?

She’s the guardian of 7 gates taking off her garments (These are the chakra bodies) in order to descent to the lower gates.

The 7 gates represent other realms of existence as each chakra correlates with each level of reality.

Ishtar is the Goddess of magick, sorcery, omens etc.

The physical universe is one big ASS root chakra.

There’s another reason why multiple animals attribute to her…Each animal represents her passage through the zodiac.

Again, theologically symbolizing human consciousness as well as the reflection of the cosmos.

Isis And Ishtar Are One In The Same

These mythological stories are recycled over and over.  A strong parallel exist between Ishtar And Isis. 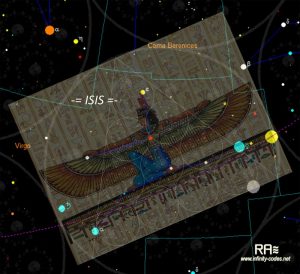 If Ishtar is the Sumerian (Ancient Mesopotamia) Sky Goddess, then Isis would be the Egyptian equivalent.

She’s also known as Persephone of Greek mythology.  It’s always a repeated tale of a Goddess falling into the underworld.

Other Titles Given To Isis: 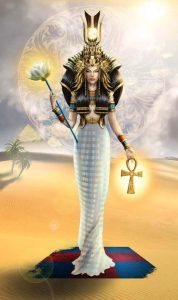 The astrotheological zodiac Virgo associates with Isis, Ishtar, and Persephone.  All the heavenly sky mothers fall into Virgo.

“The sign of Virgo itself stands for a synthesis of these three feminine aspects – Eve, Isis and Mary. She is the Virgin Mother, providing that which is needed for the mental, emotional and physical expression of the hidden but ever present divinity. These three expressions are brought to the needed perfection in Leo, the sign of the individual, developed self-consciousness and personality unfoldment.”

Secrets Of The Pyramids

The original meaning of the word “Pyramid” is “fire”.  Fire is symbolic of primal energy as the source of creation.

The pyramid’s focus is to initiate a person into the mystical teachings.

What sort of magickal initiations? 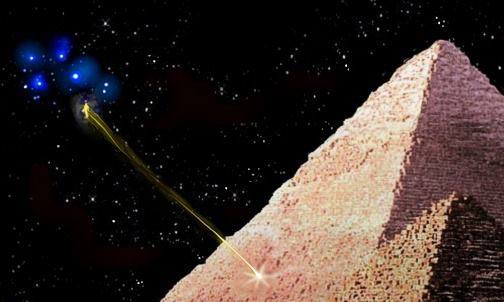 “In the King’s Chamber was enacted the drama of the “second death.” Here the candidate, after being crucified upon the cross of the solstices and the equinoxes, was buried in the great coffer. “

“This room was a doorway between the material world and the transcendental spheres of Nature. While his body lay in the coffer, the soul of the neophyte soared as a human-headed hawk through the celestial realms, there to discover first hand the eternity of Love, Light, and Truth, as well as the illusion of Death, Darkness, and Sin.” The Secret Teaching Of All Ages

4. Ancient Symbolism Of The Third Eye

Is the third eye the seat of God?  I’m not talking personal God a of white-bearded entity, floating on the clouds.  I’m talking about the visions of God”  or God seeing. 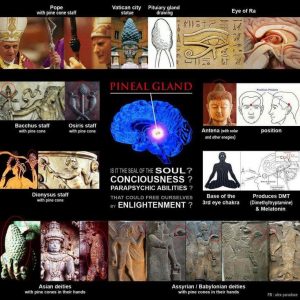 We contain a 3rd optical nerve connected to the pineal gland.  The third eye gland activates during states of conscious raising to higher levels of reality.

Rituals, Toltec dreaming, meditation are ways of inducing more of this glands energy.

Originally named after the pine cone because of its shape.

A shell encasing an astral signature.  The astral is the energetic side of physical matter.

The pineal gland is the physical aspect of that energetic signature.  More on pineal symbolism, Are Psychics Real? Skeptics Scared Stupid. 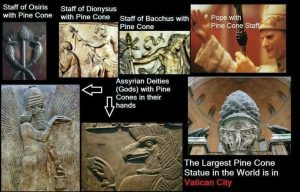 Do you notice the image of the Pope holding the staff with a pine cone?

Is it just another coincidence that it’s showing a symbolic representation of the the pineal?

Another symbolic figure we see this Buddha statue.  Notice the top part of his head as it’s shaped in a swirling pine cone.

Check out the statue sitting right dead smack in center of the Vatican circle.  A PINE cone!  I mean come on, is it any more obvious?

The ancients shrouded everything in symbolism.  The ancient god Marduk holds a pine cone.

Dionysus holds a staff with a pine cone on top.  Another symbolic representation of the pineal gland.

5.  Mitra Of The Fish God Dagon 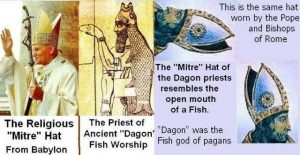 The ancient fish god of Dagon associates with a dragon.  In the collection of ancient Judaism, the passages of the book of Judges states this….

The Death of Samson

Judges 16:23-30 “Now the rulers of the Philistines assembled to offer a great sacrifice to Dagon their god and to celebrate, saying, “Our god has delivered Samson, our enemy, into our hands.“

Remember I mentioned it’s theology shrouds itself in symbolism pertaining to consciousness, matter and energy within the human being and its relation to the universe. 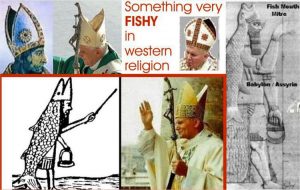 Dagon gets mentioned in the book of Samuel: 5 in Dagon’s temple

“Dagon was fallen upon his face to the ground before the Ark of the Lord; and the head of Dagon and both the palms of his hands were cut off upon the threshold; only the stump of Dagon was left to him”

What Does Dagon Symbolically Represent

The astral/solar energies of the human body as well as male seed of initiation, oppose to the women’s seed of creation.

It creates LIFE! Women contain the seed of creation.  But now for now we’re talking about the masculine sexual symbolism of the fish God Dagon. 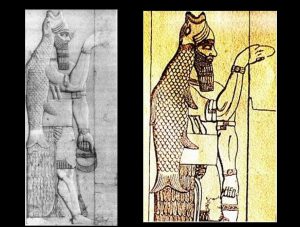 Again why is Vatican praising a fish god?

There’s always speculation, but I believe they’re all about worship of their dark nature.  This means dark animalistic lower ego obsessions.

Don’t think there’s any morality or dogma in abusing your sexual energy.  All theology pertains to human awareness of energies and physiology.

And being a slave to your own animal-minded nature.

The sexual fluids again contain the most powerful energetic signature within our body.

Along with other energies we get from food and air, but sexual fluids are high energetic potency.

Gnostic teachings states this “Fornicators worship the lustful passionate fires of their own particular, individual Dagon or Leviathan; they expel the fish (Human Sperm), their sexual strength through the orgasm or sexual spasm. They are slaves of Dagon, the Leviathan. Jonah was expelled by the Fish, the Messiah on the shores of Nineveh because he was not a fornicator.” gnosticteachings.org 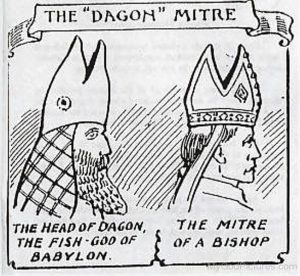 The Sun, as he pursued his way among these ‘living creatures’ of the zodiac, was said, in allegorical language, either to assume the nature of or to triumph over the sign he entered. The sun thus became a Bull in Taurus, and was worshiped as such by the Egyptians under the name of Apis, and by the Assyrians as Bel, Baal, or Bui. In Leo the sun became a Lion-slayer, Hercules, and an Archer in Sagittarius. In Pisces, the Fishes, he was a fish—Dagon, or Vishnu, the fish-god of the Philistines and Hindoos.”gnosticteachings.org

Why is so much hidden from us?  Do they not want to give up knowledge?  There’s theories on why they kept this hidden and it has do with interdimensional beings  as well.  But that’s a whole story of it in for itself.  Until next time.