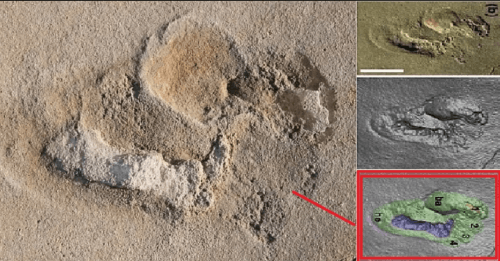 A controversial discovery of a human type (bipedal) footprint was found in western Crete Greece far from the origins of humanity in Africa, which dates back to the late Miocene period, 5.7 million years ago. 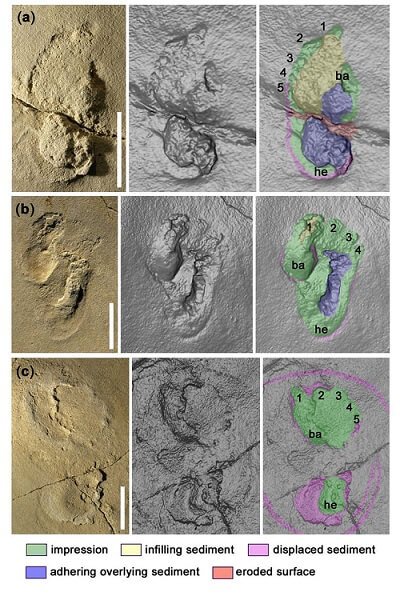 This was long before the species of upright walking hominid and had paleoanthropologists/anthropologists walking in a maze of controversial questions circling their head.

Some suggest the footprints came from an earlier evolved non-hominin primate or it could’ve been just an early hominin human species that predates the homohabili (Proto modern man).

All of this adds up to something very interesting,” says Per Ahlberg, a paleontologist at Uppsala University in Sweden and a co-author of the new study. Ahlberg and his colleagues concluded that the prints were made either by an early hominin or by an unknown nonhominin primate that coincidentally evolved human-like feet.

A few researchers got backstage passes from the Greek government in order to conduct their research in 2002.

Gerard Gierlinski of the Polish Research Institute in Warsaw, discovered this ancient mystery which opposes the views of the mainstream narrative of human history. 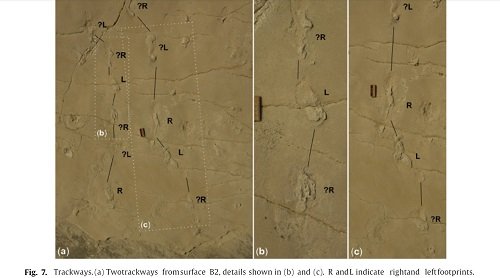 Along this journey, Gerard paired up with Per Ahlberg at the Uppsala University of Sweden to analyze these remarkable tracks.

The oldest hominin foot fossils we have are from the 4.4-million-year-old Ardipithecus ramidus. But Ardipithecus had an opposable big toe that would have left a distinctive pattern in its footprints. The Trachilos track-maker appears to have held all five toes parallel.

This controversial find puts a wrench in the engine of the mainstream view of the human evolutionary timeline.

Their research concluded there’s no mistake that there’s a human foot with the big toe in line with the other tarsal bones, whereas the hominoid ape has an opposable thumb extending out laterally in order to grab branches.

Even though both man and ape are known to walk up right, there’s morphological differences between a ape hominid’s foot vs a human’s foot.

“There’s something slightly funny about the big toe,” says Ahlberg. “Its position and shape are very similar to those of a modern human, but it seems to be more mobile,” a bit like the opposable thumb of a chimpanzee.

Researchers conducted an analysis on the sedimentary layers and found well preserved marine organisms called foraminifera which date back as far as 450 million years ago.

There’s a marine succession (An abrupt change in the ecosystem through a natural disaster) at one of layers formed by removing the Mediterranean’s basin layer in the course grained sedimentary rocks during the Messinian Salinity Crisis.

The crisis was a geological event during which the Mediterranean Sea went into a cycle throughout the latter part of the Messinian age of the Miocene epoch that occurred 5.7 million years ago. 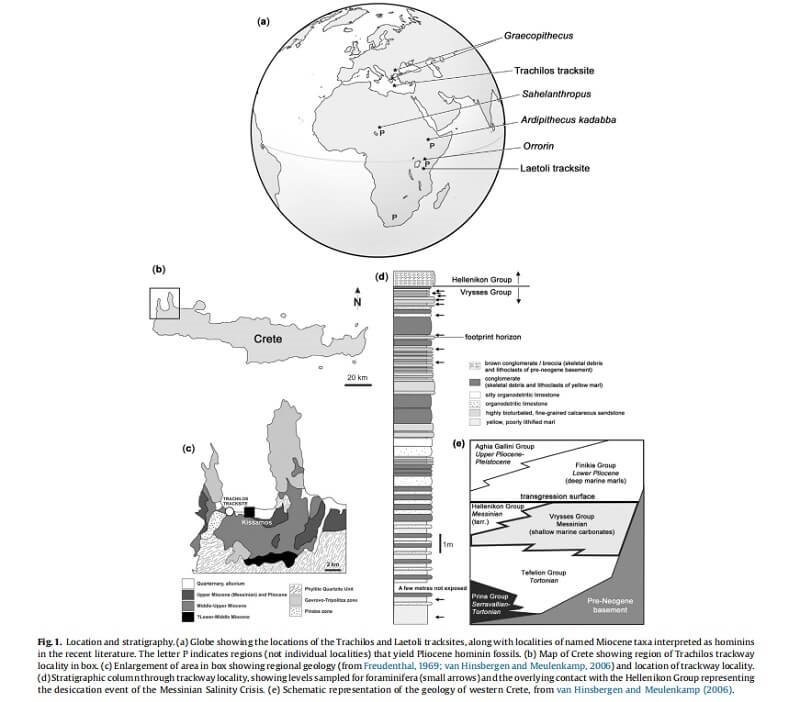 Eleven foraminifera samples were taken at intervals through approximately 20 m of succession, spanning the tracked horizon and terminating just below the Hellenikon Group conglomerate(Figs. 1d and 4). All these samples yield both Hastigerina pelagica and Globigerina pseudobesa (Figs. 4 and 5), constraining the samples to a time interval between 8.5 Ma (late Miocene,Tortonian) and 3.5 Ma.

We conclude that the succession at Trachilos can be securely assigned to the Miocene and dated to the time interval 8.5 to 5.6 Ma based on: (1) the end-Miocene Hellenikon Group is the only terrigenous incursion into the marine succession of western Crete during this time interval;

The researchers took 11 samples of foraminifera from the sedimentary rock layer which each weight about 0,5 kg and processed using Glauber’s salt and imaged by an SEM (Scanning Electronic Microscope). 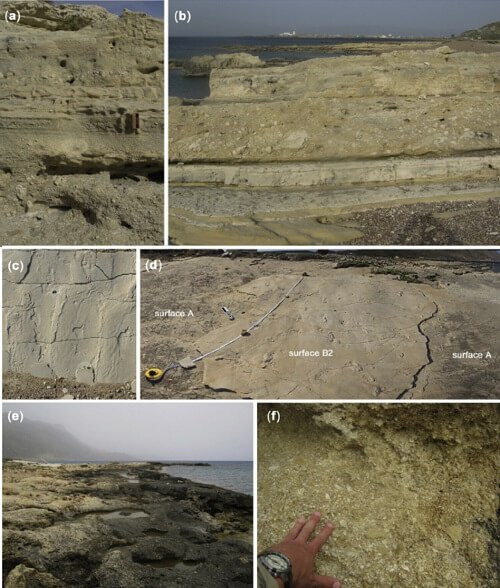 There were more findings within the assemblage fossils of the sedimentary such as fishbones, gastropods, ostracod, echinoids.

The track forms by a series of reactions between the shape/anatomy of the foot pattern through a substrate elastic enough to form and rigid enough to keep the impression.

Digital morphometric measurement was taken on the site along with laser scans, revealing a 3-D image of 400 square meters.

The area filled with 50 individual prints, which allowed the researchers to collect analytic data about the shape of the footprints.

The characteristics of the Trachilos footprints that need to be explained are: bipedality and plantigrade posture; pentadactyly with entaxony and an absence of claws; the distally attached and non-divergent bulbous ﬁrst digit and short lateral toes; and the presence of a distinct ball in some of the tracks.

The morphometric analysis suggests a closer afﬁnity to hominin track outlines than to those of extant non-hominin primates.

The Trachilos tracks contain a well-defined ball and lacks claws which the primate ape completely lacks.

It’s plausible the tracks formed by an extinct family of the homos, but if that’s the case, then this completely shatters the mainstream view of the humans dating back only 2.5 million years ago. 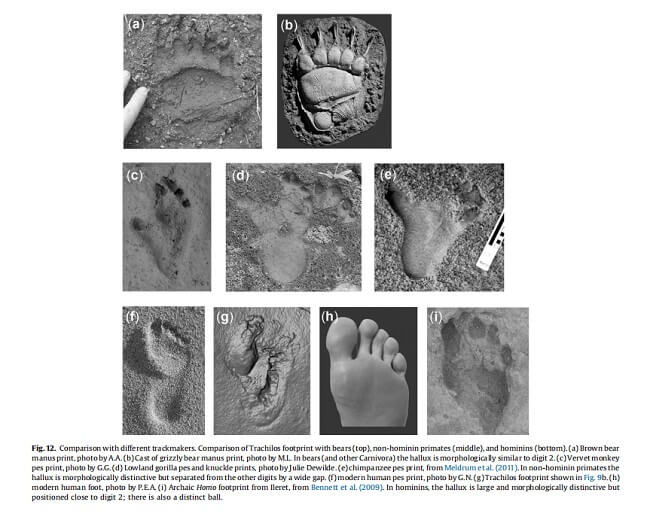 Bear feet have similar morphological impressions like the Trachilos track and sometimes the claws leave no marks behind, but there’s still distinct difference such as the width of the bottom of the foot and the short stubby toes in comparison show in the image fig.12.

Bears and certain other Carnivora have pentadactyl hind feet with heart-shaped soles and short toes, somewhat similar to the print morphology described here, and their claws do not always leave impressions. However, carnivore prints are rarely entaxonic, and certainly never to the degree exhibited by the Trachilos prints;

Chimpanzees produce characteristic L-shaped footprints with a wide gap between the hallux and curled lateral digits.